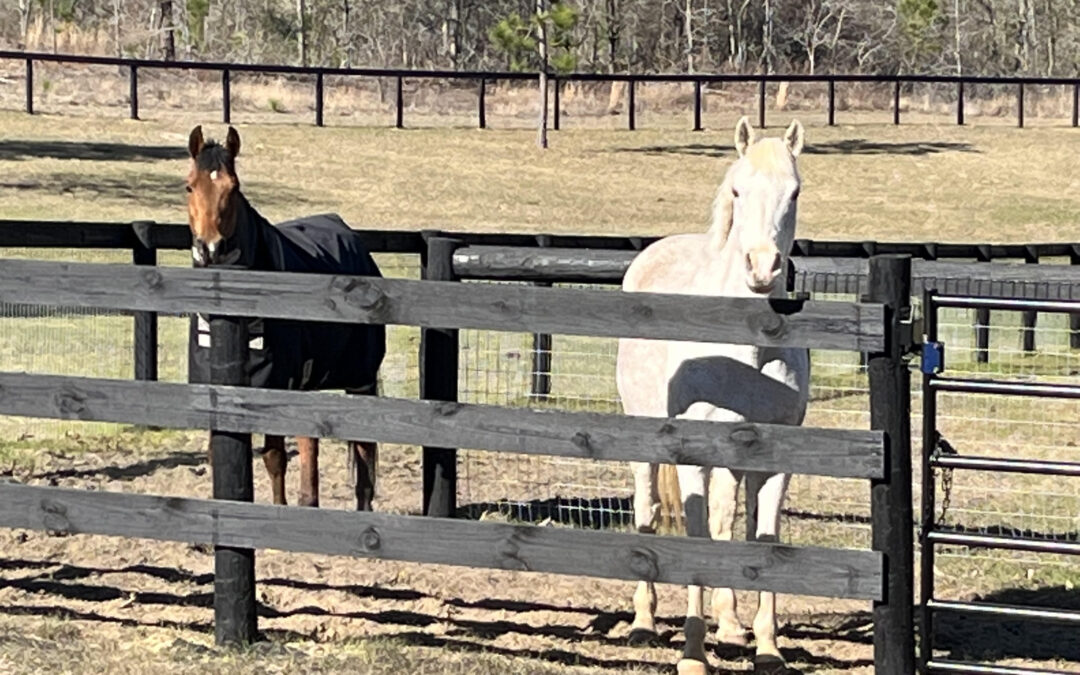 Elise asked me not too long ago—

What is your favorite thing about endurance riding?

It’s getting to know a horse so intimately well that you can ride him 100 miles in one day.

And oh, the people, the crazy people!”

My favorite horse people, and honestly, my favorite people overall, are the type who have busy, analyzing (maybe even overanalyzing) brains.

I find this strange balance between anthropomorphizing my horses –guilty as charged– and treating them as the individuals equines they are, with all of their decidedly horsey nature.

Respecting that they are each their own jigsaw puzzle of personality and physical and emotional strengths and weaknesses. As am I.

They are not all the same. Not at all.

If I had to use one word to describe each of the horses I’ve competed and come to know so intimately in endurance, I could:

Dunkin – so far I pick “professional” – but I reserve the right to change my mind on that, since I’ve only been getting to know him for six months.

Iggy’s word would be “quirky.”

Iggy came into my life four years ago, coincidentally purchased from a woman who lived not more than 20 minutes from where I reside now in SC.

In short, he’d intimidated her a bit, a bit resistant to gainful employment and with some occasional acting out.

Over the last few years, there were numerous blogs about Iggy, lots of lessons learned, experiments tried, and by the time my marriage was breaking up, I felt I had his quirks identified and managed, and he was a reliable and safe endurance partner.

When it became apparent my divorce was not going to settle quickly, and I had more on my plate than I could handle, I opted to lease him to friends. I simply didn’t have the bandwidth for a complicated jigsaw puzzle and I absolutely could not afford, financially, to get hurt.

These friends are experienced endurance riders and very good horse people. I warned them about the quirks, of course.

In both cases, my friends found him, after some time, and quite a bit of effort, to be “not a fit.”

When he came “home” the second time just before Christmas, he’d been gone two years, but now he was moving to South Carolina, to join Dunkin at the house purchased last summer, in our new pastures and with our new barn modified to accommodate horses.

At that point, my friends told me (and I believe them, of course!) that his quirks had become more disconcerting. On at least one occasion, he’d bolted. He’d exhibited unmanageable buddy sourness at a ride. This all went well beyond quirky. And it was stuff I hadn’t experienced before with Iggy.

They’d treated him for ulcers, he’d been tested for Lyme and EPM. There was no shortage of effort applied to fixing whatever ailed him. These are my people. They do these things.

Upon receiving this news I said to Tom, “Okay, companion horse problem solved.” (We’d been trying to figure out who would keep Dunkin company when he moved from the boarding barn to our house.)

I hooked up the trailer and went to Virginia to pick Iggy up. He looked great, bright-eyed, as I knew he would. He’d been well cared for and well-fed.

Strategically, I drove from Virginia straight to the barn where Dunkin was boarded to pick him up to bring the two of them home, together, for the first time to the house.

As anyone who knows horses can tell you, there’s nothing like a trailer ride for two horses to fall in love and/or resolve a relationship. Those boys had a 20-minute haul from Hannah’s to our place to work it all out.

From the moment they moved home, it seems as though this was the way it had been pre-destined. Perhaps that is true. Stranger things than this have happened to me the last few years.

Dunkin is in charge of all things eating. Which is good, because he needs more groceries. On the other hand, Iggy appears to make decisions related to where they go and when. And they go, a lot. Walking, grazing, silly gallops all around the pastures.

Iggy barely lifts his head to say hello and goodbye as Dunkin comes and goes out to be worked. Dunkin, on the other hand, does his own conditioning for about 10 minutes when Iggy is taken out, galloping, swapping leads, getting in a little cardiovascular workout, screaming, but then he settles in, stops calling and eats.

I found a truly delightful young lady, Elise, to help me get Iggy legged up again. Eighteen and fearless and unfailingly polite and obviously horse-crazy, a tiny little beautiful creature, she’s perfect for the job.

I warn her about the quirks, the potential misbehaviors, but so far they’ve been only mild, and she handles them with aplomb. One mini-bolt, quickly squelched.

(Ironically, she’s riding him the way I would have handled them when I was eighteen, a few concussions, years and fractures ago.)

“He was a little sticky in the canter, ma’am, when I was flatting him, so I galloped him around your house a few times.”

She rides out solo, does trot and canter intervals up and down the gas line just off our property. No hesitation.

I do dressage schooling between Elise’s rides. That right hind is being called to duty.

We ride together out on our trails, at Hitchcock Woods, and Iggy is getting stronger and fitter. 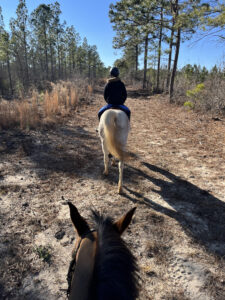 I’ve simplified what Iggy eats. All designed to keep the risk of ulcers minimized. I watch him like a hawk.

I’ve whispered to him that he’s home. (I swear that’s when the magic happened.)

He is back to being Iggy, as I remember him when he’s felt best, only more so. He adores Tom, who he views as a treat dispenser. He’s happy to be caught and ridden and hauled out to condition, to lead and to follow (mostly.) He and Dunkin stretch out for naps in the sun-warmed sand late each morning. From time to time he licks me.

I took him to Florida a few weeks ago, along with Dunkin, to visit with Dale and Gene, and Iggy arrived hungry and chill, and camped with Dunk without drama. Gene dressaged us all, and we did the analysis of my rusty-ass riding, what was working, what wasn’t – priceless insights as usual.

But the morning of the ride we’d entered, as though he’d seen it written in my calendar, he hesitated for about 30 seconds to eat his mash, so we opted to skip it. Plan B.

As I’ve learned, the secret to happiness is lowered expectations.

I’ve added, after listening to the Reynold’s talk at the AERC conference in Reno, a handful of Purina Outlast as a treat as we tack up, or in a little feed pan for the horse left behind. (Jeremy said it was a game-changer for them. I was feeding it morning and night already, but so far so good on the pre-ride treat. What a great talk they gave!)

Horses, I’ve learned, have their own sense of time.

At this stage in my life, I’ve got time. I’ve got bandwidth.

I’m working on off-loading twenty or so pounds of I’m-in-love-and-ain’t-food-grand ballast. Fasting again (how I missed it!) and working out on an Echelon spin bike between walks and yoga and riding and gardening. I plan my work schedule AROUND my workouts and riding, which is a brand new resolution for 2022 and working out great so far.

Making big changes by just chipping away at it a little bit.

I’ve got two delightful boys who make me smile, with some (unwritten) goals in my head, but the primary one being to have fun.

Dunkin is fit and happy and waiting for his older pasturemate to play a little catch-up.

Which one is my favorite?

Whichever I’m sitting on at the time.