The Sisyphus of Normal and Just Being Sam 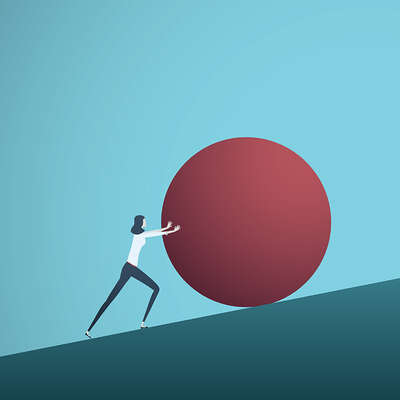 It’s been a hot minute since I sat down to actually write a shitty first draft.

Blogging can be tricky.

Do you post personal stuff? Then there is a whole over/under sharing thing but I promised that I would be real through this “journey” as we’re going to call it so be prepared for the R rated version with the R meaning Raw.  My hope is that something resonates with someone and they have a “me too” moment because let’s face it, we’re all shoving some sized boulder up the mountain.

It’s been nearly 3 months since diagnosis and I’ve completed one phase of chemo, the hardest and worst phase. Four treatments that span every other week for 8 weeks. Chemo came crashing in, I thought I of all people could ease into it. Which was ridiculous with all the poison being pumped into my body. Its hard and no matter how strong you are in the start, how much fight you have, cancer wears you down.

It’s harder now that reality has set in and this is my new normal. I’ve tried to keep my normal as normal as possible but its hard when the big C is the center of all things, as hard as you try not to let it be.

I am still working nearly full time, riding as much as I feel like it, and trying to do all the things I think I should be doing.

Doing my best to maintain Normal. To be real and, well, me. However abnormal that normal is.

Chemo is cumulative so it gets worse as it goes and that’s no joke, folks. Cancer is forcing me to slow down and I’ve been fighting it.  Every Monday I go to a ladies’ bible study and this week as we were wrapping up, a friend asked how I was doing and as much as I fought back the tears, they flowed like a busted dam.

It was the first time that I openly admitted I was tired. Tired emotionally, physically and mentally. If I am being honest with myself, I tried to stay busy and keep pushing because if I rested, I felt weak and weak worries me. Weak worries me because I fear death and if I can just keep pushing that boulder up the mountain, being normal, death can’t catch me. It helps me normalize the severity of this illness. Reference the fears above.

Bald is the new normal and I’m not even upset about it anymore.

When the diagnosis first came in, I spent hours on line researching wigs, looking at styles and color choices. As the time drew closer and I knew the hair was going to start falling out in clumps, I shaved my head with horse clippers. Shaving my head was harder than I thought it would be. The actual act didn’t bother me but once it was over, I looked like a cancer patient and that scared the hell out of me. At that moment, reality set in.

It’s been several weeks now and bald feels awesome especially in this heat. I used to wear a head covering out in public but now I go full GI Jane with confidence. Why not, right? We need to love our bodies, regardless of the dents, lumps, bumps, and scars.

At times there are sympathetic smiles but mostly people treat me normal.  I did buy two wigs and haven’t worn them since I bought them. I resent what the wig represents and that is a loss of control in my life and that’s been a real struggle for me.

It would be hard to describe my warped sense of humor as normal, but it is certainly my own. It’s been intact. Mostly.

Cancer is no laughing matter.

I grew up in a home of quick-witted, bite or be-bitten sort of humor and learned from an early age how to de-escalate situations, deflate bullies and make uncomfortable situations mostly worse with my humor.

Whether this skill was a blessing or a curse I guess depends on the outcome and the audience.

Tig Notaro, a breast cancer patient that has a stand-up comedy routine, quips “it’s weird because with humor the equation is tragedy plus time equals comedy.”

Kayla and I have been trying for two years to go to the beach together.

A hurricane decided to show up the day before we flew out last summer and shut down the island, well because that’s what hurricanes do.

Fast forward to spring, we book a trip to Key West. I’ve never been there but my little adventurist Kayla has and from the description, I decide I can bottom out on some seafood, key lime pie and Moscow mules. We deserve it I tell myself, splurge and book the walk-out ocean view hotel room on Mother’s Day weekend. Perfect.

Booked and NOTHING is going to get in the way.

The BC diagnosis came in the week before our trip and there was zero talk of canceling because there was no way that the medical system could get tumor markers, a breast MRI, a meeting with the surgical breast oncologist, an appointment with a medical oncologist, a PET Scan and genetic testing done within 3 business days. Not possible, right?

Cue the medical (appointment) miracle, just in time to ruin another vacation.  Apparently cancer gets a STAT status and you move to the front of the line.

Somehow the medical system we all mock for its inability to get things done manages to schedule all of the above during the three days I should have been sunning my buns.

Fast forward, Ty and Kayla arrange a surprise trip and she shows up at my home. I cried, she laughed. I don’t think I’ve ever been happier to see her. With Kayla’s presence, there’s a sense of controlled calm.

On Monday morning we hit the appointment trail hard, 7 am tumor marker placement. For the blissfully uninformed, imagine the worst “little pinch” as they push a 4” needle into your breast and underarm to mark the tumors so when the chemo works, the doctors will know the margins for surgery.

Well. That and not knowing if the gown opens in the front or the rear. Awkward moments on the BC journey. Machines that put you in a very awkward position. Procedures that require you keep your derriere aloft for 30 minutes or more while you’re face down and your breast is squeezed between two plates and you can’t move or the process starts all over again.  If a person were modest before this started, you aren’t anymore.  BTW gown opens in the front 😉

So after the tumor marker placement, I’m jonesing for some pancakes and verging on the border of hangry and Hangry Sam is almost unreasonable. We opt for the IHOP in a questionable neighborhood nearby.

Sitting at the booth, talking about wills, advance directives, important stuff, I break out in hysterical tears and laugher at the same time and state to Kayla —

“This sure AF isn’t Key West.”

She loses it, I lose it more, and before you know it the whole restaurant is more concerned with us than the hookers outside or the flooding ladies’ room.

Humor is the go-to, and I’ve had too much practice with this coping mechanism to find a new one at this particular moment in time.

On a more serious note, a health update.

Chemo is every Tuesday now for the next 11weeks. Physically I am doing well. The oncologist, upon palpation can feel that the tumors are shrinking and flattening out which is great news. We meet with the surgical oncologist next week and will have scans done to see how effective the chemo is progressing. White blood count is staying up which is very important in order to continue with treatment. I’ve had little nausea but mostly extreme fatigue.

One day at a time, pushing that boulder up the mountain.