Sixty Days … But One At A Time. 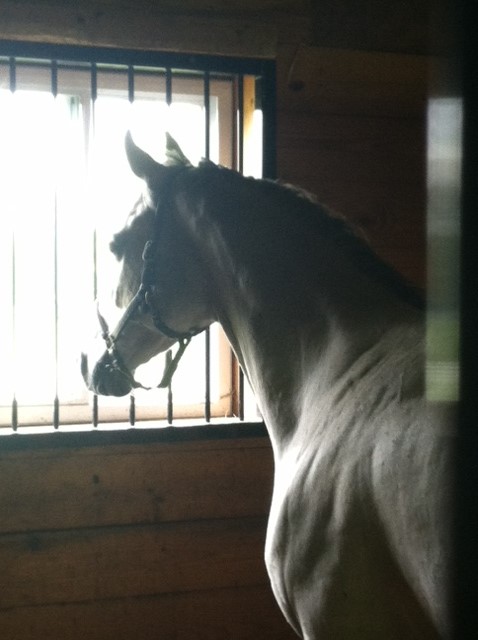 On Monday, it was May 18th, two months exactly until the Vermont 100, which is the ride I set my entire competition calendar around each season.

The day found us taking Ace, the horse I’d had my heart set on taking to Vermont, to see our lameness guru vet, Dr. Ronald Genovese, VMD, down at Cleveland Equine Clinic.

Ace, over the last couple of months, has had some on and off fill in his left front leg, just under the knee, and I’d had some moments of “did he just take a bad step?” on down hills and in shifty footing.  I’d backed off on his conditioning, opted not to take him to Biltmore, and then completely stopped all work when a post-Biltmore short and hilly conditioning ride ended with a quick longe that showed me a front end lameness, but quite honestly, so intermittent that I thought I sometimes saw bad steps on the right front, then the left front.

While I had myself convinced that it was a left front check ligament injury based on the fill, it only took a jog (sound) and then flexion tests on each leg for Doc to point to the right front (positive after flexion) to say — “that’s where we start.” He pointed to the left hind, also positive after flexion, and said “compensatory” and to my slightly-desperate query about the left front and that Red Flag fill — “also compensatory.”

Six x-rays later and we had a little sit down while we perused them image by image.

Diagnosis: High ringbone (essentially osteoarthritis of the pastern joint) and a bit of sidebone, which Doc waved off like a pesky fly.

Prognosis: Favorable with some shoeing changes and joint support.

I texted Dave, our farrier, not three minutes after we viewed the films. He started making plans to come up to reset Ace’s shoes. I texted him, and as I’m not afraid to share, I’ll quote — “I am so [expletive-used-as-adjective] grateful that you are a part of our team.” He started rattling off how he intended to deal with the diagnosis, the shoeing changes he would make, and I texted him back a simple message: “I trust you.”

This is not really a “why me?” or even a “why Ace?” moment. Quite frankly, I’ve spent the decade that I’ve owned Ace tilting my head and examining his front legs, palpating them regularly, knowing deep in my looking-at-horses’-legs-for-ages being, that those calf knees and base narrow conformation were going to catch us eventually.

In the last two weeks, without a diagnosis or a prognosis, I’ve felt, admittedly, a little lost. I suspected a ligament injury and a non-season for us. Ned made it clear he’d compete, but that I should not count on an enthusiastic leap into a full schedule from a horse who had already given plenty at the office.

I was beginning to wonder just what this riding season was going to look like.

I started working out with a friend (training to become a personal trainer) and a personal trainer. It’s a Boot Camp-style work out, challenging without being demoralizing, and it was reminding me of how much I love the challenge of getting fitter, how I take some pride in a sore muscle or grunting my way through a set when someone else might call it quits.

It reminded me that I’m not too shabby when I set my mind to it.

And now that I have a diagnosis, I have a project, and this girl loves a project.

Given that Ace is fifteen and I’ve never done anything serious or organized for him to support his joint health, I got to do some research. I have already started him on Adequan, ordered some Cosequin so we can do a loading dose, and am exploring some other options. I’ve stopped putting Surpass on the left front leg and started putting it on his right front fetlock and pastern, and only smacked my forehead once for completely missing the primary diagnosis, both by structure damaged and limb.

Dave will be here sometime next week to reset Ace and then as Dr. Genovese said with his usual enthusiasm — “Put him back to work!”

Ace was ready for a 50 when it all started to unravel, and I know that it won’t take long to get him back on track. Not only is this boy a veteran, he is a veteran on the Vermont course.

Fitness will not be the issue for the Vermont 100; we will simply have to take the functional soundness situation one day at a time.

I am working on my own fitness. While I believe strongly that the difference between a 50 and a 100 is mental, not physical, being physically strong and confident will only improve my mental preparedness.

Going to work with my husband tonight to figure out a well-timed 50 to use as a warm-up ride. Ace travels best alone, so I might even make it a two day 50 mile CTR late in June as there’s no fear my husband will be itching to take a horse to a CTR, particularly one where you wear pinnies. There are some other options. And if none fits, I’ll just get him ready on my own.

I just found it.

We can do this.