One Mile Per Hour and Matters of Matrimony 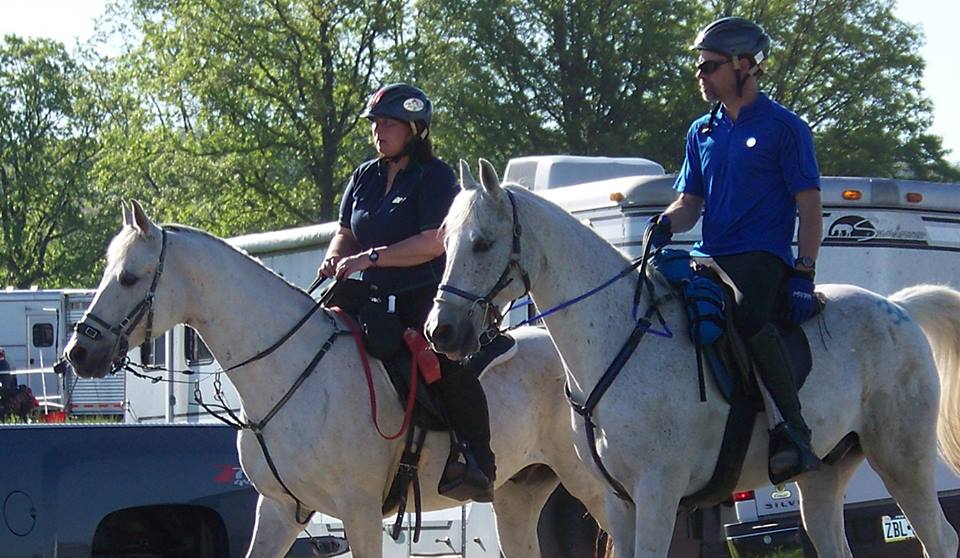 My husband Richard’s horse, Sarge, is a rock star.  He’s fast and sure-footed on a wide variety of terrain, he’s relatively uncomplicated, and he’s handily become a Decade Team horse.  He’s still going strong, and despite my worry wart anxieties, he continues to power along at the age of seventeen without appearing to need to slow down.

Ace is my first string horse these days, and is a joy to ride as he hasn’t a single naughty bone in his body. He’s a steady middle-of-the-pack guy, has done 100s quite nicely, and can occasionally Top Ten on the right course.

The difference between these two horses is roughly 1 mph.

Now, to the uninitiated, a single mile per hour is a piddly difference.  Surely these two horses can compete together, condition together, find a happy medium that suits them both so that their happily-married riders enjoy the trail together.

If a 101 clinic attendee asked me what they should do if they condition with a horse just a little slower or faster than their own, I’d have loads of advice.  Put the slower horse up front. Play leapfrog.  Stretch the rubberband and ask the slower horse to step it up a bit, speed-wise from time to time.

It’s another Do As I Say Not As I Do Moment.

All of that advice, which I believe to generally be reliable, and which we’ve utilized for several years, is just not working.

Sarge likes to be up front. He will tolerate following, but his frustration is palpable. Okay, we can cope with that.  In the end it is the safest thing to do when we are riding together.  But I appreciate my husband’s frustration at not being able to ride his horse to his capabilities, to stretch HIS rubber band.

Ace, when following, even at a pace that he’d likely maintain steadily up front, is distracted to the point of stumbly foolishness. He’s klutzier, he pays less attention to where he’s putting his own feet than where Sarge just put his, and heaven forbid his rider keep him far enough behind that Sarge disappears ahead when negotiating a sharp turn on a wooded trail.  Wahoo!

Sarge is seventeen; Ace is fifteen.  We are not talking about young, unseasoned horses with trail manners or training issues.

We are talking about Inherent Incompatibility.

Ace’s best successes have been in rides where he’s been ridden alone, with an eye to keeping him right at his own “just right” Goldilocks pace, undistracted by a barn mate at the same ride. Just a fact.

Each horse we own has a Fatal Flaw. It’s the issue that keeps us awake at night, that we fight to manage and is the one that if not tended to with great care, would jeopardize their career.

[Now I know that there are a chunk of folks out there who know Ace who are saying, “No, no, no Patti, Ace’s Fatal Flaw is that he is INSANE!” But no, that is not true, Ace’s General Anxiety Disorder is a mere neurosis, and not a Fatal Flaw.]

I blame the American Saddlebred portion of his genetics because Ace’s front legs scream “SADDLEBRED!” 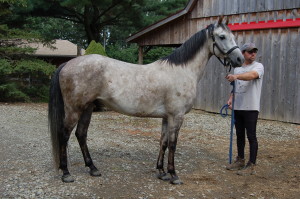 Now, let’s be clear. If someone stood me up in a conformation shot, folks could take some healthy pot shots at me too. (And there’s nothing wrong with being third trumpet, says this middle school second alto sax player.)

But those calf knees lead to a tendency to grow under run heels and long toes during a shoeing cycle. The whole shebang, especially when Ace is channeling all of his Saddlebred heritage by behaving as though he’s on his third lap of the big Expo in his Three-Gaited Saddleseat class, or when he’s four yards behind Sarge who is going 9 mph on a trail where Ace is capable of going 8 mph, especially on soft or deep footing — it all puts a strain on the tendons just below his knees — the SDFT and the DDFT.

Several years ago, when I noticed a pattern of fill just below Ace’s knee after competitions, I took him to Dr. Ron Genovese, a lameness guru in Ohio.

Dr. Ron likes me, I suspect, not only because I remind him of his aunt — yes, this 70-something old doc told me I look just like his aunt, who I can only hope is exceptionally well-preserved — I decided to be touched rather than insulted, but because we routinely bring him SOUND horses for LAMENESS exams. I think he finds that novel and conservative, if not a little odd. In fact, three of our four horses have been to Dr. Ron, and he’s never seen one of them limp.

Dr. Ron, after the lameness exam revealed a sound horse and after ultra-sounding showed only some minor fluid and no lesions, told me that Ace always needed to have short toes. Since I struggled with that concept with my farrier at the time, I asked him to write it on the discharge report.

The two factors which cause the fill to come back:

With some introspection, this is a bit of a no brainer.

Oddly enough, I started to write this blog several weeks ago, when I’d done a few days of conditioning at Big South Fork.  We’d taken all four horses and it made sense to pair the fittest — Sarge and Ace, and the less fit, Ned and Wynne.

Until the last day, when I thought I might have felt Ace take a bad step or two. Downhill. In deep footing. After four days of riding Sarge and Ace together.

Still, with my sights set on Vermont 100 on July 18th, I decided my best move was to not compete riding alongside Sarge.  I figured he could ride the No Frills 55 and I’d use the LD as a conditioning ride for Ace. (There was no way to just ride the 55 slowly one MPH slower than Sarge; okay, maybe Ace has two Fatal Flaws. He’s got a teensy problem with separation anxiety.)

Some kind of head cold/flu bug ruined our No Frills plans, which left us opting for squeezing in a whirlwind run to Biltmore, a ride where I’d done the 100 with Ned, but which Richard, whose business always left him too busy to get away in early May, has always missed.

Rich agreed to riding a 55 at Ace’s pace.  It was a decent Plan B although I worried about the marital strain of saying “Can we slow down a little?”

Until today, when I was finally able for the first time in days to take a deep breath without coughing, and popped Ace in the riding ring for a bit of free longeing.

When I palpated his legs after the little jaunt, some warmish fill in that left front leg.

Time for Plan C. The only thing worse than asking Rich to ride my ride would be to spend the entire 55 miles worrying, or worse still, having a sound horse with a little fill turn into a lame horse with an acute tendon injury.

I’ll be heading to Biltmore with Rich sans horse. For a moment I considered tossing Ned in the trailer for the LD ride, but the old man hates a long trailer ride, and without the burden of a second horse, I was able to persuade Rich to move up to the 75 on Friday.

But I already have made a plan with our farrier, Dave, to glue/nail on the EasyShoe Performance, which is significantly lighter than the N/G (due to the lack of a nail plate.)  He’s a Farrier God, who needs a nail plate?  That will take a few ounces off those already-stressed tendons and will still allow me to take a bit more toe as we approach the time for a reset.

I’m in 100 Mile mode. The whole season is laid out with the sole purpose of getting to Vermont 100 with a fit, well-rested, incredibly sound horse whose Fatal Flaws have been well attended to and put to rest. I’ve been around the block enough to know that you don’t need to do a pile of 50s to prepare for a 100. Especially with a veteran horse who has already done the course.

Waiting on my husband and his horse hand and foot so they can go rock the Biltmore 75, when both are ready to rock and roll?