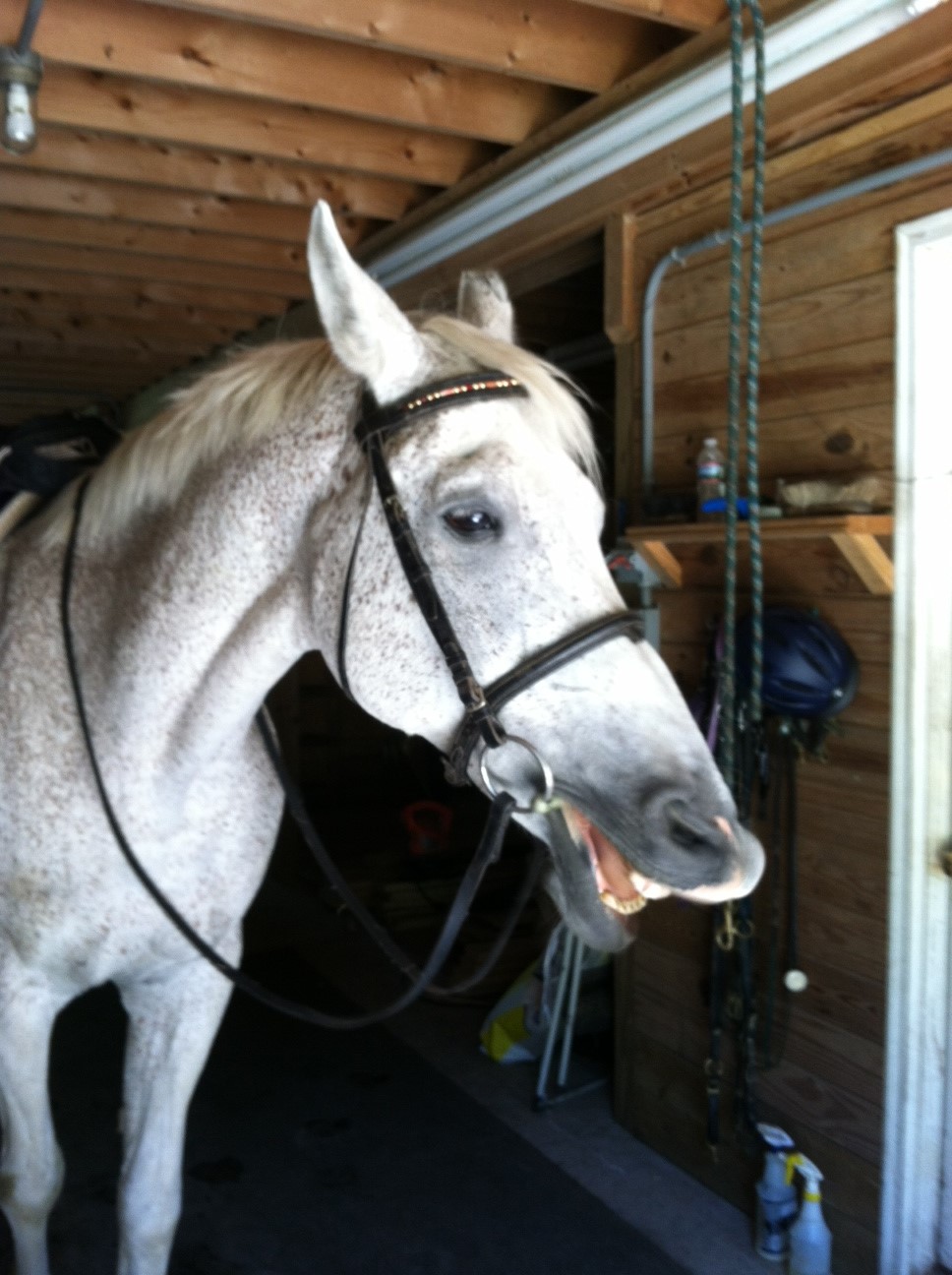 A dressage schoolmaster was something I thought ‘Other Riders’ had.

Other riders, much more “serious” than me, with more funds, more aspirations, and did I mention more funds?

A slightly creaky, noble beast who could be a curmudgeon but knew what was right and what was not right, and would respond appropriately when appropriate buttons were pushed with appropriate timing. Honest but not overly generous.

The concept that Ned would ever fall into that category never crossed my mind until today, his 21st birthday.

Ned was my dressage horse before we competed in endurance, but we only showed at Training Level before I rode my first 50 mile ride, and the rest was history. I continued to lesson and clinic and school between conditioning for rides, but I’ll admit, as Ace came along and our competition season got more booked up, our riding ring has seen little use.

So Ned, or Breezewood Nevarre6 (the 6 is for the six 100-mile rides he completed during his decade plus endurance career), has grown up and gotten old more as an endurance horse than a dressage horse, at least to the outside world.

Let’s set that aside for a moment …

Two weeks after a nasty fall off “Brakeless” Wynne, I told Rich I’d like to ride him again if I could; he agreed. I fitted the handsome guy with his new Myler combination bit this afternoon, confident he would no longer be brakeless, tacked up and headed out to the ring. I didn’t feel afraid as I swung a leg over (what a relief!) but let’s face it, I was riding in an enclosed space now wasn’t I?

What a difference! We walked, trotted, cantered in both directions and executed, with rather light aids, a one rein stop in each direction at all gaits. Good boy, Wynne!

Lots and lots of pats. No hard feelings.

We schooled some lateral work, requested some 10 meter circle bending, and I even, bravely, gave him a fairly obvious leg aid with my calf once or twice because I had the means to say “No, that means ‘move over’ not leap forward” or “No, that means ‘step under’ not leap forward.” It was a lovely ride and I told Rich I’d dearly enjoy schooling him some more if he was okay with me stealing his ride.

It will be rewarding to get to know one another better through some dressage schooling. It always is.

It had been some time since I’d ridden Ned, so I tacked him up as well, figuring on just some stretching and loosening as we’re hitting the trail tomorrow.

I’ve often described my relationship with Ned as oddly like that of an old married couple. I irritate him, he bugs me, I chastise him, he reminds me that he is much taller and much stronger than me. I show him I can out-wait him and I do.

If dressage is like dancing (and it very much is) I am the wife trying to drag her husband out on the floor at a wedding. I beg, I plead, I nudge. He groans, he sighs, he refuses, and then, him mostly dragged, we finally head out to the floor and start to dance.

We are a little rusty at first.

He is not as nimble right out of the barn as he used to be. I used to have to be prepared for capriole or Spanish Walk the moment my right foot hit the stirrup. Or before …

These days, I let him walk for several minutes on a loose buckle to warm up.

He reminds me that I don’t need to hang on to the inside rein as we start our first 20 meter trot circle. (I grumble but let it go, embarrassed.)

I tell him he might need to add just a teensy bit of forward energy.

He tells me he’d happily do so if I’d quit nagging with my heels and blocking with my seat.

I do less, he does more. And so it goes.

And then we’re dancing.

Lest anyone think I’m implying FEI-level work here, we’re talking, maybe 2nd level movements. Shoulder-in, turn on the haunches, canter from walk and down again. But Ned has always been a lovely mover; the old man still has moves.

He reminds me how much I love to dance.

I keep thinking, oh, we’ll just stretch down in trot and quit, but he offers another movement, and he is just such a talented dancer.

Of course he does. If I get the aids just right.

I find the cues again, subtle ones, closing of a ring finger on the reins, an inward lift of a seat bone. (By golly, I can ride!)

He’s the husband who can’t be dragged off the floor at the wedding. Just one more song.

Sometimes, I’m not quite sure who is leading.

Lots of peppermints and pats and a big kiss on the nose, which of course seems to piss him off.

He is still Ned after all.

Thank you to Walter Zettl and Dorothy Hokanson and Paula Kierkegaard, because I’m pretty sure we looked pretty klutzy out there in our formative years. It just took us a decade and a half or so to work it all out.