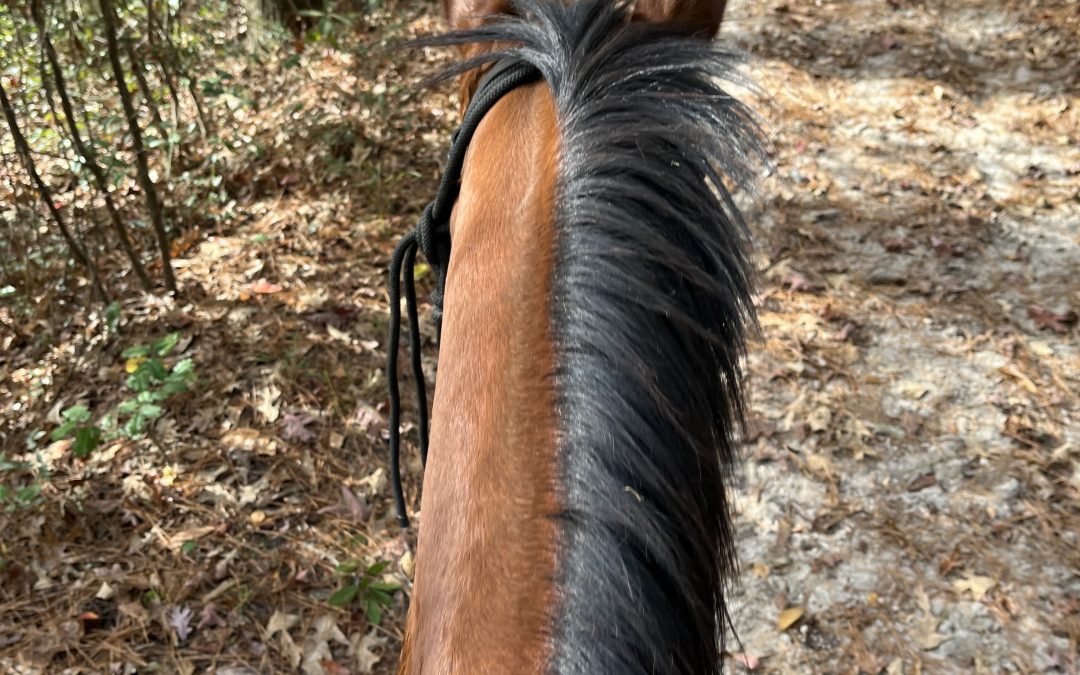 The Dunkin Project is going well.

I’ve done some things handling Dunkin in the last month or two that remind me of the time spent with my first horse, Benny.

Benny was the horse I “leased” when I was ten years old. “Leasing” Benny meant that I rode 5 miles each way on my banana bike –you kids might need to google that– to clean stalls in order to have the privilege to ride him.

When I was twelve years old, I used my babysitting money to buy him and pay for his board.

Benny was a bit of a gateway drug.

I was not the first adolescent girl who can claim a nearly-romantic relationship with her first horse. Homecoming did not mean much relative to a football game or a dance, but it did mean that I got to ride Benny in the Homecoming Parade. (Go Alden Bulldogs!)

Not that I was interested in Prom, but there was a horse show that weekend, or some 4-H event, so skipping was a no-brainer.

Benny was theoretically an Arabian/Quarter Horse cross, a lovely and sweet and safe horse, a jack of all trades. He did not stand out as a particular ‘type’ of horse so I competed him in all of the divisions — Western, Saddle Seat and even Barrel Racing and Pole Bending.

What he definitely was was ridiculously well-trained.

The one horse show class in which we were undefeated, or close to it, was called “Command.” The announcer would call out gait changes and within three strides you had to follow the command, or you were out. Walk, canter, halt, trot, back up, canter, halt, side pass right, counter canter, halt. You get the idea.

I suspect that in many ways I was a better horse trainer at 13 years of age than I am now, a bunch of decades later. Why?

I spent countless hours with Benny. I experimented and fiddled and did a million things that I now know violated all of the Pony Club rules. I didn’t really have a mentor to assist so I was a mix of risk-tolerant and wildly curious about what I could teach Benny to do. I had time.

I find myself in a similar place with Dunkin. Even though I’ve had him for a year, I’ve only recently begun to play with him. Very little planning other than carving out time together. Experimenting.

I learned a new word recently.

Paraphrasing, liminality is related to a passage of sort, from one stage to another. 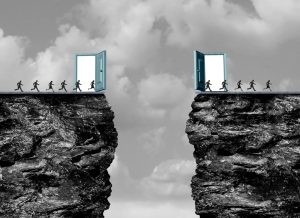 I’ve had no shortage of changes in the last few years. And here I am, in transition, learning to ease my foot off the throttle, slow down, play.

While I am grateful for this privilege, it has not necessarily been easy.

What helps, both in life and with Dunkin, is having an Oh Shit Strap.

I was provided an Oh Shit Strap by Lani and Kathy, a hand-me-down from a small horse, held together with a bit of duct tape. I added alligator clips so that it attaches quickly to my saddle’s D-rings. 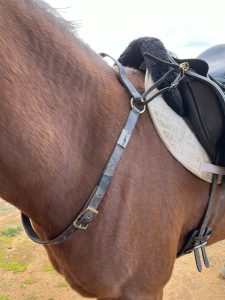 Sure there’s a little duct tape securing a strap, but I adore this  piece of tack.

It’s constructed so that it provides a handle of sorts.

Readers, you need to know that my first riding instructor, Mike Tremblay –a complete cowboy– would threaten to break our fingers should we hold on to, or even dare to touch, the horn of the Western saddle as we rode. I was seven. Needless to say, purposely tacking up with something designed specifically to hold onto as a means of security has been a bit of a brain stretch for me.

An Oh Shit Strap does a strange thing. It allows me to put a leg on, sit a little taller, and play. I also think it’s a gift for Dunkin. I can ride on the buckle, exhaling, knowing a suck-back spook or a bounce to the side to evade a shadow are simply a moment in time and the message continues to be “go on ahead, let’s keep playing!” I don’t grab him in the mouth, inadvertently. I don’t ride defensively. I sit up. I laugh at his irrational fear of fox squirrels.

I acknowledge that I am no longer 15, or even 35. The ground is harder, I am a little softer, and my reflexes, never exactly cat-like, ain’t what they used to be.

My Oh Shit Strap allowed me to haul Dunk to Hitchcock Woods all on my own to walk/trot/canter trails there one gorgeous afternoon when none of my riding buddies were available. It’s been a long time since I hauled a horse to go ride on my own, meeting no one. Tom was tracking my iPhone. Elise knew where I was riding, and I’m fairly confident she would have come to rescue me, fond as she seems to be of keeping middle-aged women safe. I had a new little dog tag on Dunk’s rope halter with emergency contact phone numbers. I’d checked all the reasonable-risk boxes. I am a safety professional, after all. 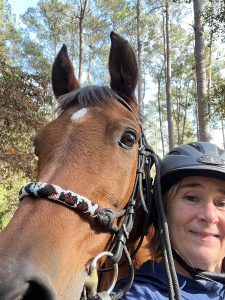 Post-solo ride I sent a selfie to prove we’d survived. There’s no other reason a 55 yo woman should take selfies.

My time with Dunk of late has been less goal-oriented, more just fiddling around. One day I hopped on and just let him walk, on the buckle, wherever he chose. I was surprised to find that after a stroll around the edge of the woods, he walked directly back to the gate where Iggy stood. He’s never struck me as a barn-sour horse. In fact, I’ve laughed with people that he lacks altogether what I call a “going home walk.”

Rather than just let him stand at the gate, I side passed him left and right, moving his feet back and forth, then offered him the opportunity to walk away, which he happily did, all the way around the barn to the far side of the paddock, where he also stopped and stood. I chuckled at him and this time asked him to back up, halt, step forward, back, one step forward, one step back, and again, offered him the opportunity to walk away. He did, right into the woods and on trail, where we strolled the perimeter of the property cheerfully, still on a loose rein, and I hopped off well away from the barn, gave him a cookie, and then returned to the barn.

Some days we play with ground work. Dunk is, no question, very good at going forward at a good clip. For miles and miles and miles. Standing still, moving one foot at a time, waiting, those are tougher questions for him. So we play with it, halfway off the trailer, back in, halfway off, waiting until asked, back in, until his eye softens and he’s listening and watching, rather than reacting. Tons of praise, scratches, and we call it a day.

Playing. Asking questions. Stopping and calling it a day at the right moment. We have time.

It reminds me so much of Benny.

Recently I’ve had a respiratory bug of some sort. Elise has also been unavailable, so Dunk had nearly a week off. Some days I’ve felt well enough to go out and feed or brush the boys for a couple of minutes. Three days ago, puttering around in sweats, I was inspired to collect Dunk, brushed him a bit. Opted to tack him up, grab my helmet and mount, walk literally to the entrance to the trail, with Dunk all cheerfully forward and willing, hand firmly holding my Oh Shit Strap. Not physically up for more, I turned him back to the barn area. In the yard, we did about ten minutes of walking in circles, shoulder in, haunches in, leg yielding. It was enough.

Then I took a nap. 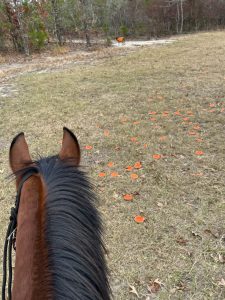 Just a brief walk past the claybird shoot evidence from the Thanksgiving weekend. Nela, waiting, wants to know why we’re going so slow. 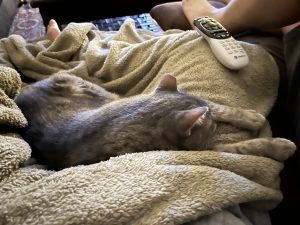 When you are sick, why is lounging on the recliner with the cat not nearly as delicious as it should be?

Yesterday I felt marginally better. Again, on a whim, I tacked him up and headed directly for the woods with Nela, all decked out in her orange vest. The energy was different, Dunk was on his toes, the breeze was blowing. Planning to only ride on our own acreage, still, Dunk was amped. He spooked a bit at the dog, then as we were heading back, gave a little buck/fart/leap. It was only a stride’s worth and with the Oh Shit Strap, I just giggled, and shortened the reins up a bit. Back to the yard, Dunk still “up” and knowing this was not a good time to stop for the day, we cantered figure eights with walking transitions until Dunk snorted and snorted and snorted. That was my sign. We stopped, stood quietly in halt until he snorted again, head low, relaxed. Then I praised him, scratched him and dismounted.

It’s a time of liminality, channeling a relationship with a horse I loved nearly 50 years ago, right into today, with a bit of a handle to hold. 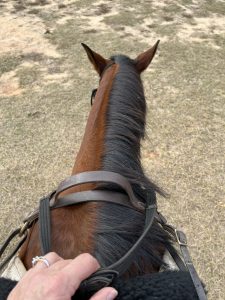 After some big canter circles, standing quietly, relaxed. Time to call it a day, ending on a good note.