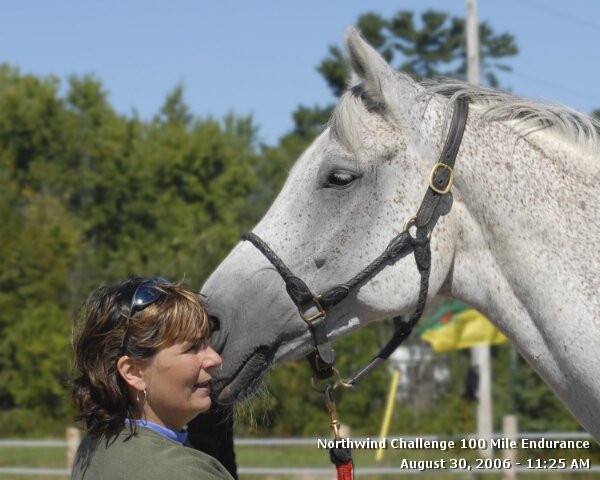 Damn. This one is tough to write.

Ned has been a huge part of my life for nearly twenty years. And tomorrow we will be letting him go.

Some creatures — human or equine or canine — just have more personality than others. Ned has been mammoth in more than stature. When we were competing heavily and walked up to vet in, I’d see the eyes go up and down the 16+H, 1200-pound, size 4-hooved creature and I’d just say “he’s half Trakehner.” 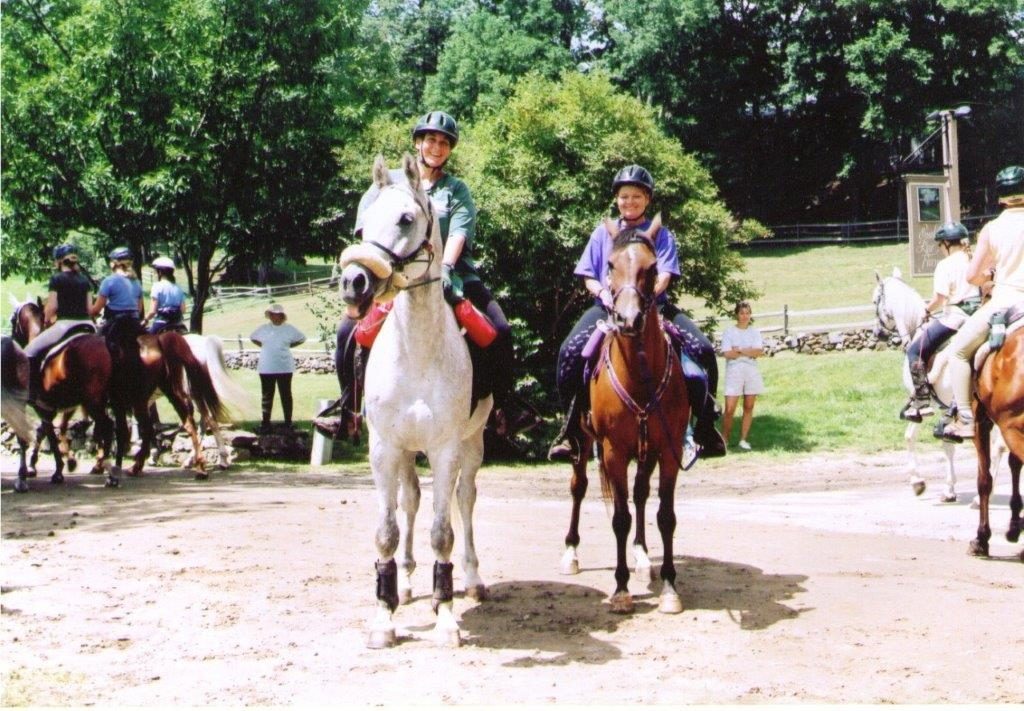 He was meant to be the competition dressage horse whose half-Arabian self could condition with my husband.

Ned was naughty. From the day I went to look at him to purchase — he kicked at me twice when I did his flexion tests — to the last time I swung a leg over him, he had a propensity for mischief. His bolting won me a severe concussion and a fractured pelvic rim when he was just five. I learned to sit up and ride him from Moment One, helmet firmly buckled on. Still, I fell off him more times than I’ve come off in my life previous or since. He taught me fear.

Bucking was too pedestrian for Ned, so he perfected the art of leaping. The better he felt, the more he leapt. I learned to keep my reins short, my shoulders behind my seat bones and my heels down. Walter Zettl, with whom I took dressage lessons back then implored me to keep him in dressage for at least a year, “stay off ze trail.”

Back when I was first getting into the sport, there was no Facebook. There was Ridecamp. I recall asking the group, after Ned spooked on a trail and promptly jumped down a steep, treed embankment, if there was hope for a horse that appeared to have little sense of self-preservation. Almost universally, I was told to move on to a safer horse. For some reason, I didn’t.

I know why, in retrospect. It was because when he was on, he was the most amazing ride. Big gaits and full of attitude, smooth and handsome. When he wasn’t misbehaving — and to be clear, he was mostly gentlemanly — I felt like a dressage queen sitting up there on that powerful keg of horseflesh. He could dance like no other horse. And I liked him. Naughty as he was, he wasn’t mean. He was smart and opinionated and had a ridiculous sense of humor, if a horse can have such a thing. He was all about Ned. 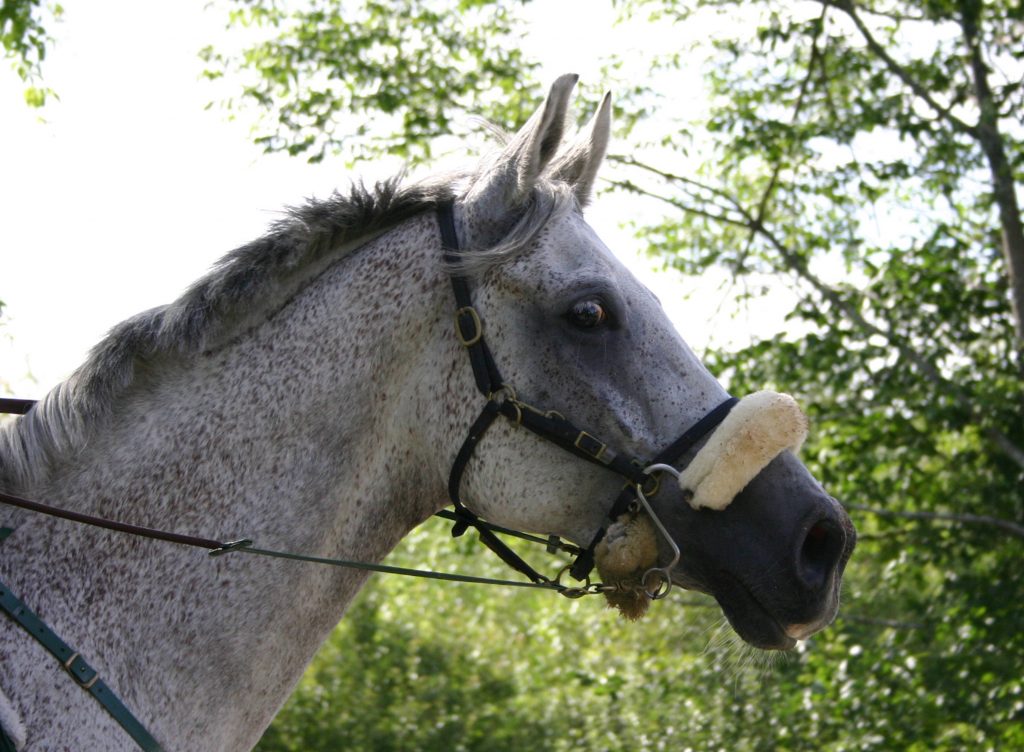 Our vet asked me once during spring vaccinations — “how old is he now?” I can’t recall if he was 18 or 19, but he remarked at how good he looked for his age. I quipped — “being an a$$hole keeps him young.”

He did his first 50 at Elk Valley the weekend after he won his Training Level test at his first recognized dressage show, and that was that. We were hooked on the sport. (Not dressage, for the record.) Over a decade of competition, 6 100s, and we competed all up and down the east coast, from Florida to Canada, often just the two of us and whatever poor soul would help crew us not-lightning-fast, heat-challenged fools through 100s. 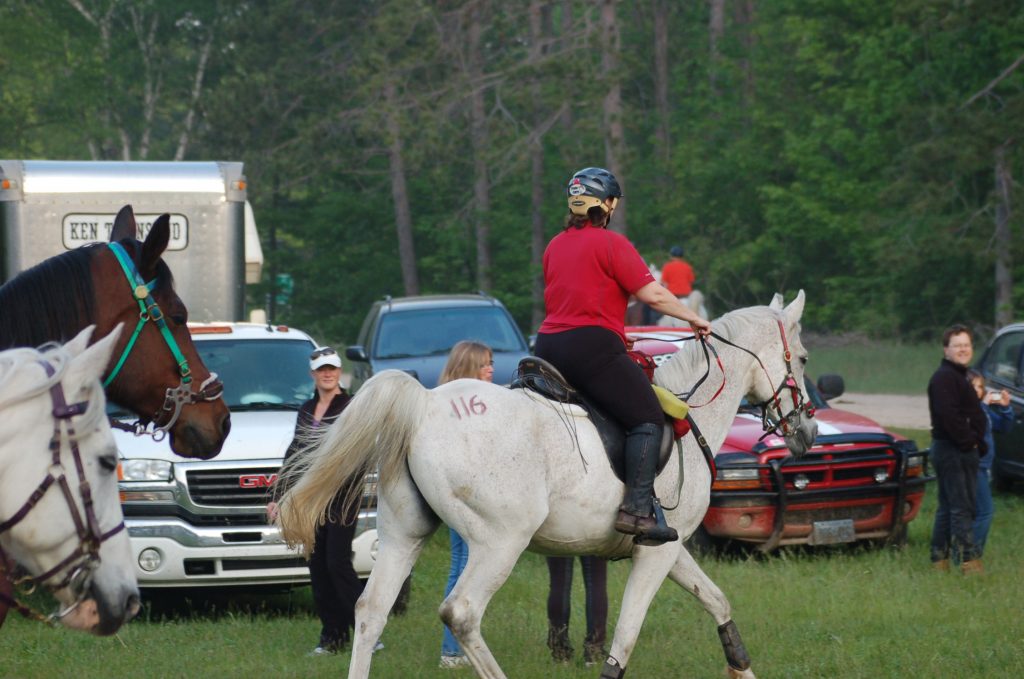 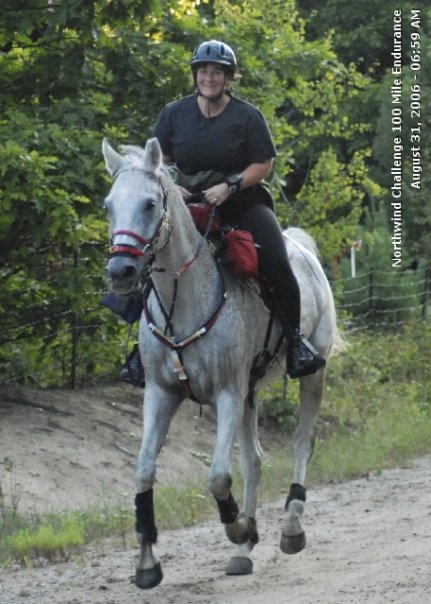 And then there was his penis. His dangling penis. The penis that made his trot out to a cone lackluster, but once retracted, left me running like my pants were on fire to catch him as he headed back to the vet.

It was that penis that showed his first melanoma. A tiny pea-sized tumor on a stalk. Dr. Otis Schmitt found it at a ride in Florida. He joked that he could just bite it off with his teeth. I welcomed him to do so.

It got removed. No problem. Not by Otis. He’s a big fan of having his head attached to his body.

Then another tumor removed. This one larger, angrier, and when it went to the lab, it was a melanoma. We hadn’t gotten all the margins.

All this quietly went on behind the scenes, I put him on this med and that one, and five years ago, had a tumor within this sheath (10 centimeters in diameter) removed at Cornell, along with some of its friends. It bought us some time. “Just watch, Patti, he will die of something else at a ripe, old age” a veterinary friend told me. 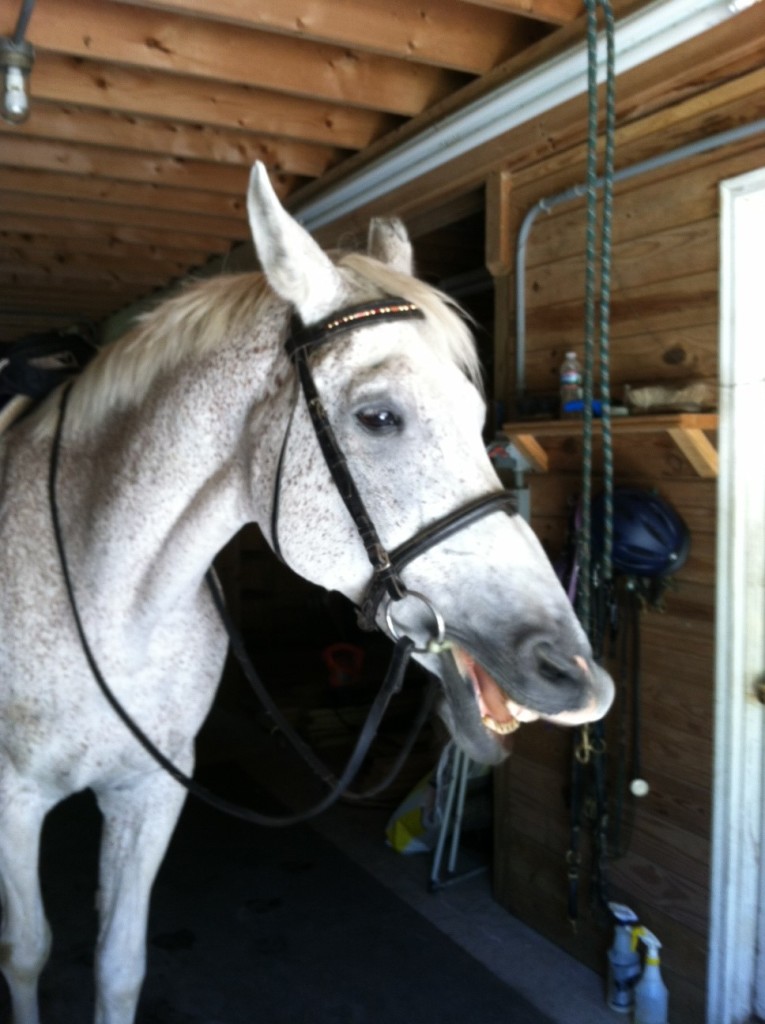 I cried when I rode him after that. It changed everything. It was no longer about competing or speed; it was just about enjoying his cantankerous company. I even laughed when he occasionally tried to eject me. If he wanted ridden, we rode, if he wanted to dance and do dressage, we did that. If he didn’t feel like going far or going fast, we turned for home. I told everyone he didn’t owe me a thing. 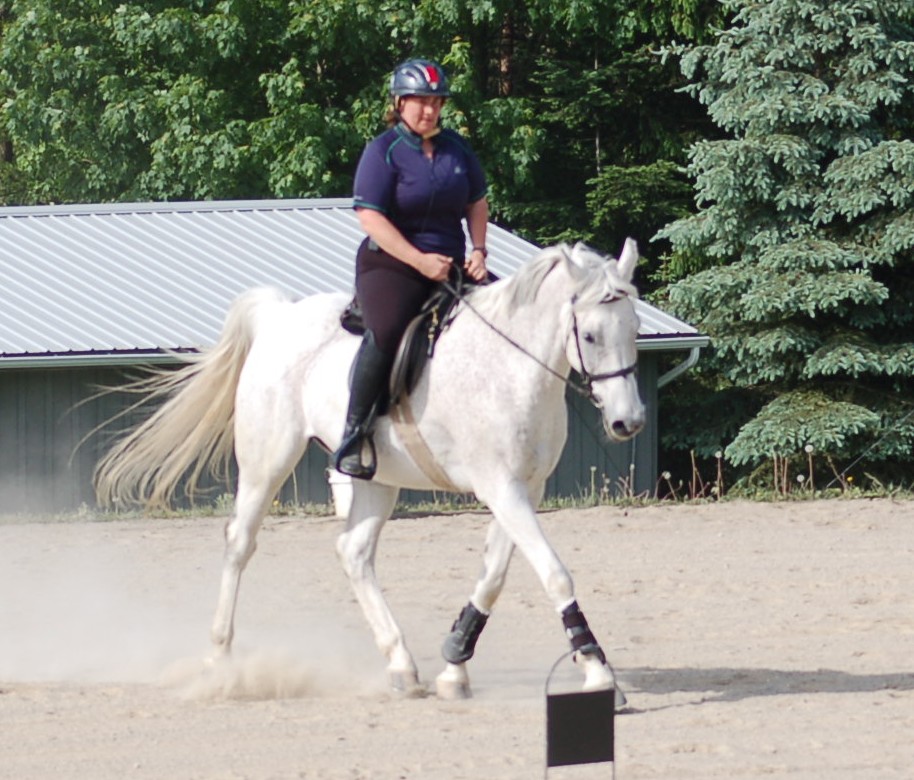 Ned got me writing. For the first time, really, since creative writing courses filled my elective schedule at Cornell, our adventures inspired me to tell stories, my lessons from mistakes with him prompted me to try to spare others from making the same. I wrote a series of articles for Endurance News about our first 100-mile ride. Wrote a few more. If you run a search on “Ned” on this website, you’ll be busy reading for a long, long time.

Ned connected me to so many people. It’s difficult to think about what’s to come without wondering who else I should tell. Got to know veterinarians and other 100-mile riders and dressage folks because of Ned. Shared trail with so many (if Ned approved of their horse). Shared Ned with others — most specially, my sweet friend Rachel (who Ned loves, because she lets him do almost anything he wants) who rode him in her first 100, while they escorted my younger horse, Ace, and me, to his first as well.

But mostly I got to know Ned. Those 100-mile rides in the dark were amongst the most special times. Magical, really. Forwardforwardforward on the trail, a profound sense of well-being, meeting a challenge and doing fine, just fine, tired (me) and hungry (him) but riding glow stick to glow stick. So humbling. I always asked on 100s in those late-night miles, “Was this too much to ask, Ned?” and always he told me, in his own Ned way, that it was not.

Our marriage is not a perfect one, which I think is what makes it so special. An easy horse would not have taught me so much. And while he was not always the submissive type (this is a massive understatement), he never quit and he limped so rarely that when he got a hoof abscess a few years ago and was three-legged lame, it was disturbing on a level I couldn’t have imagined. While I would pat myself on the back about how well I knew him, he’d turn around and surprise me. It seemed he enjoyed making a liar of me.

“No, Rachel, he doesn’t have to pee, he’s just being lazy.” Ned stretches out and takes a long, luxurious piss, farting a couple of times just for effect.

Just a year and a half ago, with a new horse in the barn meaning we had two pairs of horses to ride, Ned got fit enough to do a 35 mile LD (with me). He was a ball-buster all day, and yes, I fell off when he spooked on the first loop. I dusted myself off and made my friend Nicole promise not to tell. 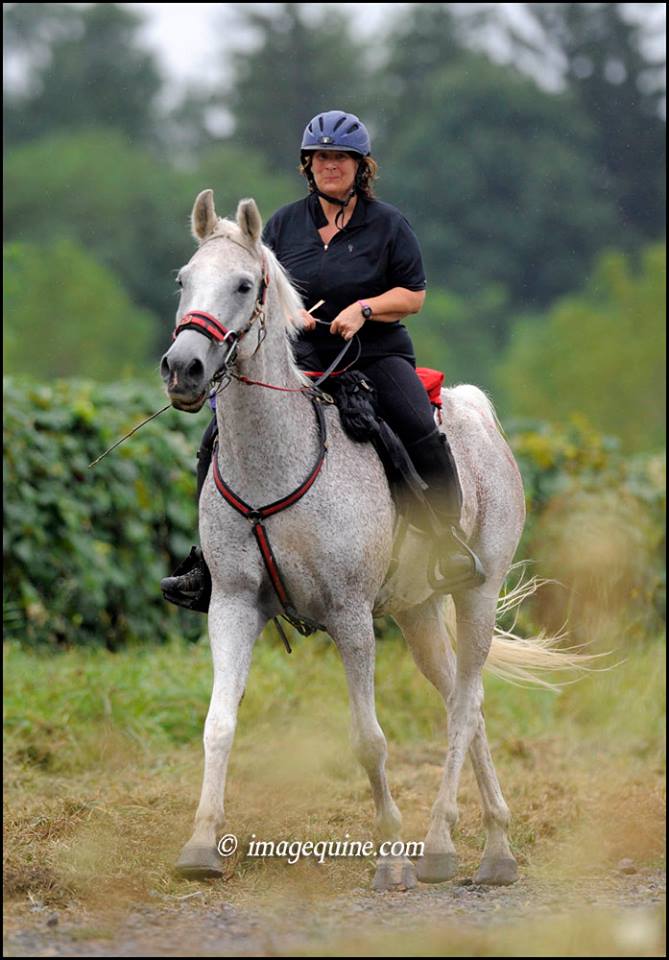 Boy, he seemed fit. Although he hadn’t competed for a couple of years, I wondered if he was up for a slow 50. So I offered him to my friend, Dawn, although the offer came with a lot of cautions about his behavior. I warned her that she might be out on trail a while if he was in a mood. I half-hoped that Rich and Wynne would stay a good hour ahead of she and Ned so I could crew for one, and then the other. But he rose to the challenge of keeping up with his barnmate and darned near Top Tenned a fast ride. At 22. I hadn’t thought to suggest she wear gloves. She had blisters all over her fingers from holding him back. He wasn’t going to let that bay horse he bossed around at home leave him in the dust. Moodily competitive based on a million Ned-related factors, right to his last competition. It is fitting.

This winter, I was brushing him, and found a lump on his shoulder. At first I thought he’d been kicked, but no, it was a tumor. I found others on his midline and when I reached up above his sheath (and scratched, because I can make his lips wiggle wildly by doing so) it was obvious. The time we’d leased was coming to an end. I waited to cry until I came to the house. I’m not sure why I felt I needed to do so. To this day I have not cried on him.

Ned is no cry-baby. So I’m trying not to be one in his presence either.

There are so many adjectives to describe Ned. Some are not allowed on network television. But one of them is stoic. He stands with his left hind leg off to the side a bit now, raises it frequently for long periods of time. His body has had to make room for the tumors. Our vet, Joe, did a rectal exam when we did spring vaccinations. Soccer ball-sized tumors inside.

Was it time? Not yet. Not then. He was certainly uncomfortable, but not in pain.

But now it is.

How do I know?

By looking at his eyes. He is still regal and proud, but it as though he suddenly got old. The light is not gone, but it is dimming.

These warm spring days have had us turning the horses out in our driest pasture in the mornings. He’s the first out the gate. Our three dogs romp and run and the puppy, so young and silly [ohmigodwhatarewedoing, shewillbreakourheartonedaytoo says my inner crazed voice] even as I laugh then choke back a sob. I watch Ned carefully from the porch. He rolls and he grazes and from a distance, just standing there, he almost looks okay. He is not lame, but he must swing his hind leg out in such a way that his gait looks odd. It is hard to watch. 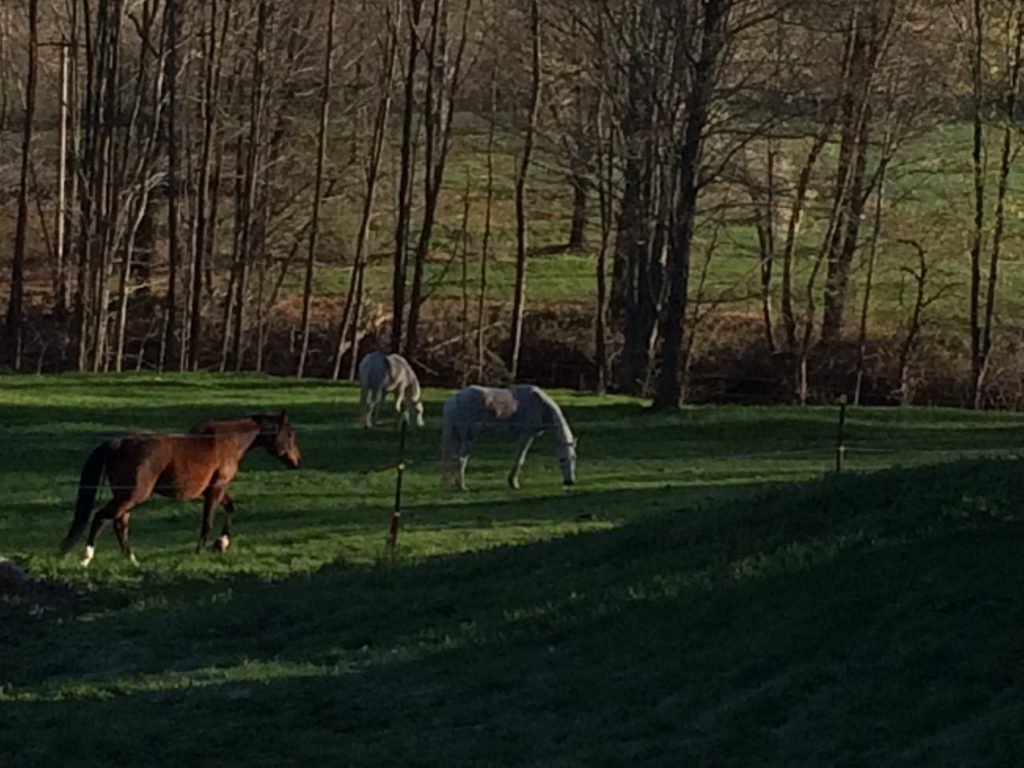 But it is not that discomfort, not mine, that prompts me to make the decision to let him go. It is the knowing that he will not quit, will not give up, that he will stay uncomfortable until a tumor grows too large in the wrong spot and he colics, or is unable to drop that so-often-publicly-displayed penis to urinate. I will not allow that stoic horse to feel pain that in my heart I know is imminent.

I owe him that.

And so much more.