I Bought Him For His Brain … 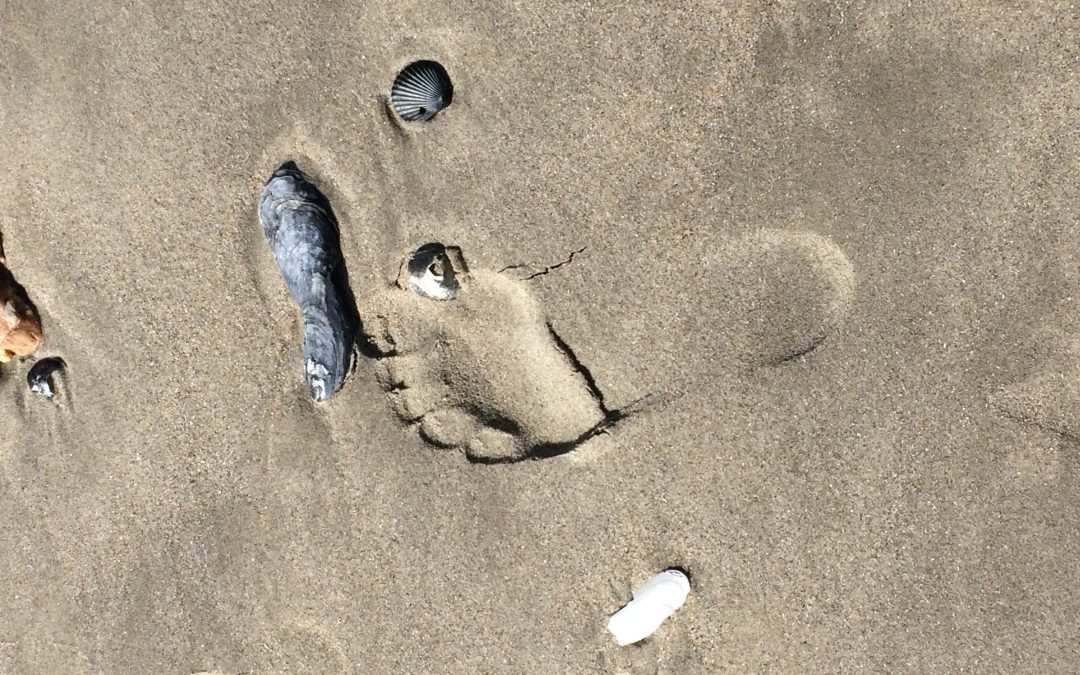 This week I am vacationing with my brother’s family in the Outer Banks of North Carolina.

My nieces are almost “up and out” as I like to call it, in their late teens and early twenties, and the youngest two are here, with friends in tow.

The platitudes I heard in my youth (largely ignored) have come home to roost.

“Youth is wasted on the young.”

Everything from quips about metabolism, sun exposure, financial security, to notions about taking risks, and the benefits of sleep.

I was astounded to hear, over dinner conversation, that one of my niece’s friends had recently tattooed on an arm — “Love yours.” That’s pretty connected and heady insight for a barely twenty-something.

Perhaps this generation won’t be our ruination. (This was something I heard a lot about my own generation from folks in the grandparents’ age-range.)

I take secret joy at the uncanny personality traits I share with my older brother.

Each morning, we are the first to rise, within minutes of each other. We’re quiet and seek coffee, then immediately settle into work, or at the hotel on our way to our destination, do a tap dance of happy feet. We are anxious for the folks who sleep to a more civilized time to join us so we can hit the road.

But don’t rush us if we are on our own timeline.

When he’s in the kitchen cooking, like me, he just wants to be left alone. Help? No, thanks. I stay away. I get it.

Our Dad is just the same. Add one more vote to the “it’s all in the genes” bucket.

I marvel at my nieces. They are witty and sharp and irreverent and so uniquely them.

Our generations are so different. They are attached to their electronic devices in a fierce way, they are acutely aware of their appearance — my peers didn’t have our eyebrows “done” or sit in shops getting pedicures in our teen years — and part of me envies their self-awareness, another mourns their freedom from the burden of self-criticism.

They fight. They are cruel. As I walk on the beach, I contemplate sitting them down, admonishing them for the sharp words and the associated hurt feelings that lie deep after the battle is over. My brother and I were torturous to one another.

But the platitudes would be lost in the generational translation. If I were lucky, they might recall them as they hit my age, so what’s the point? We must make our own mistakes, take our own path, and the comfortable and peaceful ease with which my brother and I share space is a testament to the fact that we do learn, we forgive, we find a restful place to settle in with one another.

We find our lane.

I like walking alone on the beach. There’s something about the sound of the waves, the seeking out of the ‘just right’ texture and firmness of sand. I didn’t have time to paint my toenails before I left. They are bare and plain. The teens’ nails are done, of course, various shades of pastels and pinks and bright colors. I feel unfinished for a few moments as I stroll along, like a woman caught with her hair in a mess in her sweats at the grocery store by someone she’d prefer to impress.

I turn back for our rental house, hoping I’ll be able to spot our beach access stairway from the dozens that look exactly alike.

I find myself following my own footsteps. They are clear and straight and firm, and I recognize instinctively my own despite all the others. The width, the narrowness of the heel, the depth of the push-off, but most of all, I recognize the path chosen. No longer am I thinking of my feet with regard to their decoration, or their unsightly callouses in need of a good pumice stone, but the fact that they have carried me, held me up, propelled me forward (and occasionally off course) for nearly half a century.

The last year or two have been for me, lived in a bit of a fog. For reasons I cannot say, I had to choose a path that left me starting over in a way that I never imagined. It was the right thing to do, I can say that as sure as I can look in a mirror, hard, and tell myself I could begin again. These were both things I did as a mantra of sorts, during days and nights where I was unsure of either. My friends and Richard held space for my temporary insanity. Some battles you wage alone.

It has only been in the last few months that the fog has cleared a bit. I stopped waiting to live until ‘things were better.’

That, of course, was mostly because things had gotten better.

With Ace and Ned, my long-time partners and 100-mile horses retired (Ace due to ringbone; Ned due to growing melanomas), I put it out gently to the universe that I was open to a new horse for me. Sure, Richard had Sarge and Wynne and I was happily riding both, but there is something about a horse of your own. A partner.

As these things happen, I’ve found, horses started to appear. Some rejected outright, some needed a visit.

Enter Iggy. I hope his former owner will forgive me for changing his barn name.

He’s eleven this year, and I’ve given my grown-up self permission to buy a mature horse after years of taking on barely-started greenies. He passed through a couple of hands, did a couple of rides when he was 7 or 8. He’s been mostly idle for the past few years.

When I was told he was gray and a little lazy, I said ‘no thanks.’ But something made me ask a few more questions. And then I agreed to go meet him, a mere 14 hours from home.

He needs a little weight. He’s a bit narrower up front than is to my liking. He’s entirely unfit, and desperately needs a cushioned and strong topline. But we can build that. He’s indeed gray, and as the melanomas inside Ned spread, I raise an eyebrow in my own direction at my willingness to make the same mistake twice. 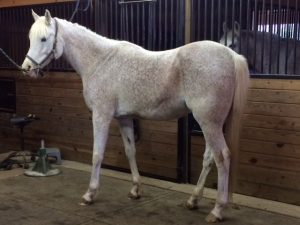 His feet needed some loving. Within a few days of his arrival, I grabbed my rasp and hoof knife, sent photos to our farrier, Dave, and got to work. I exhaled with relief as he went from this: 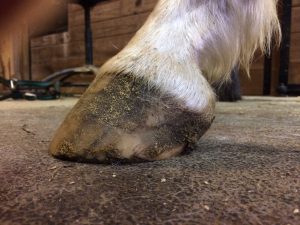 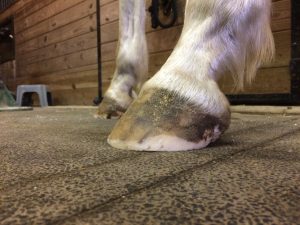 Perfect? No, but we have time.

The thing that won me over about this middle-aged horse was his brain.

I was ready to say no as I ran my hands over him and tested his buttons in the riding ring. Until I took him out for a little hack. I was warned that he could be a bit barn sour. Off we went.

For a moment he hesitated, a subtle ‘suck back’ as I like to say. I’d already learned in our test drive around the ring that he was not a fan of a lot of leg, and he was irritated if you asked more than once. So in response to his subtle “Do I want to go forward?” I offered the subtlest of aids, a shift of my hips in the direction of the trailhead. “Yes, sure you do.”

And along he went. So I left him alone. I never had to ask more than once for him to go forward after that. We made a tacit agreement that I would ask once, and if he said “yes, ma’am” I would stop asking.

Some horses have a profound intolerance for being nagged. Arabians, in particular, I have found, are sharp and quick and if asked more than once, are irritated by ongoing requests. Legleglegleglegleg, or handhandhandhandhand (or heaven forbid, both in tandem) results in one of two things — being entirely ignored, or an ear-pinned cranky horse who with every fiber of his being is saying, “Oh please, God, would you just shut up and leave me alone?!”

Walk, trot, canter, both leads, smooth and soft (when I insisted) and sound, even and symmetrical. I had to ask him to slow the tempo more than once; this was not a lazy horse.

He never put a foot wrong. We were challenged by the most absurd of Arabian Spooking Triggers. A cat who, no kidding, leapt out of the bushes as we passed. A Border Collie who, 3/4 of the way into our ride decided he needed to herd us back to the barn so arrived, Mach 4, at our heels, barking. And the llamas, oh dear, in the pasture beside the trail, apparently especially ornery during breeding season, whose odor can only be described as an order of magnitude worse than cat pee.

The horse was unflappable.

And this has been how he’s been since that moment. From the trip home to the introduction to our barn and herd and dogs and trails.

He is sound and sure-footed on our rocky trails after life for a long time in soft sand. He’s not sure he’s a fan of our mud. He travels well up and down hills, and as I told someone about his fitness, he just needs to trudge up and down mountains in good balance for a month or three.

With three years off, I think he occasionally asks himself if he is 100% on board for a “do over” in middle age.

But I’m pretty sure we’ve got this.