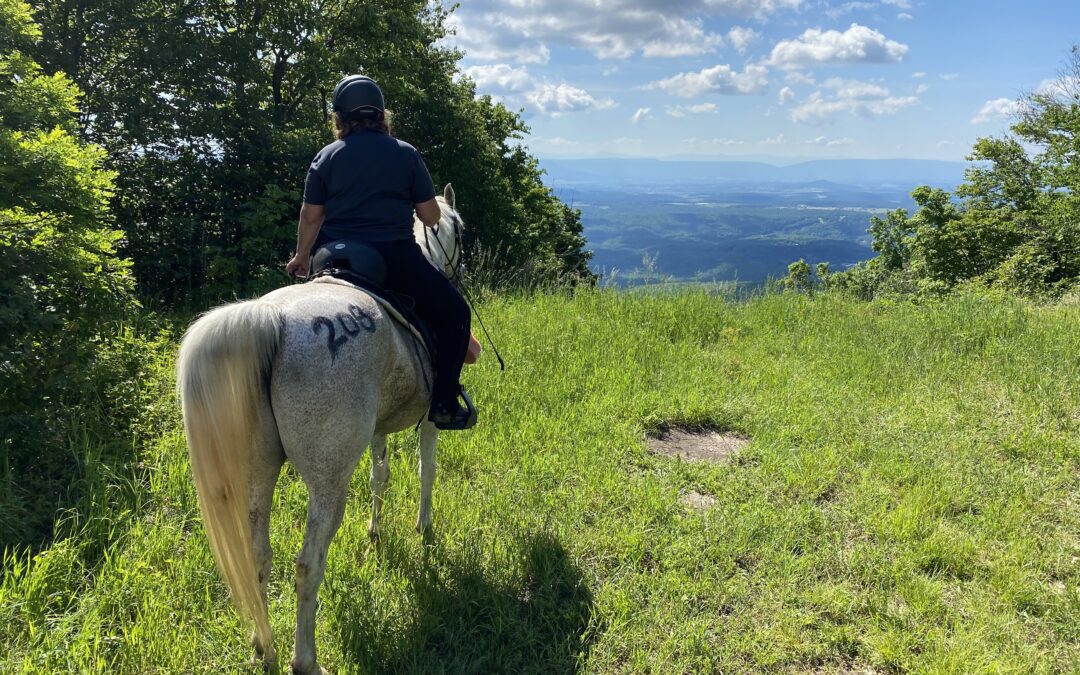 The Wednesday night prior to the Old Dominion ride, I lie in my little trailer, listening to the pouring rain, relentless on the roof.

One of the worst things about the sport, in my experience, is being warm and dry while my horse is cold or wet or otherwise suffering in the elements, camping in his portable pen.

I’m not unique in pondering this question.

For a myriad of reasons, people leave this sport. Each reason as unique as their own life story.

The next morning, with the National Championship 55-mile horses warming up, my own munching hay and content, the rain having stopped <thank you, God>, I was reminded exactly why I do this.

“Want me to hold him while you get on? Here, use my mounting block.”

“Remember, chewy side up, steel side down.”

“Can you believe this? OD and I’m wearing a SWEATSHIRT!?”

“Be safe out there.”

“I’ll see you at Bird Haven, I have your electrolytes!”

The sort of encouraging words that are uniquely shared between tribe members who have watched one another suffer, and triumph and endure. Through the years, through different horses, through victories and tragedies, through injuries and illnesses and life changes.

And not just the familiar faces, but those new to the sport, or visiting from a far-away state, catching their eye as they walk their handful of a horse, game face on –

“Hey, have FUN out there! It is a gorgeous day!”

Clear and cool and breezy.

I recalled a time I crewed for a Mighty Morgan in the 75-mile ride many years ago, glancing down at the temperature readout on the dash of my old Volvo, 96 degrees. At midnight. This forecast was freakishly cool for a ride known traditionally for being brutally hot and humid.

I had time to hand walk my boys, Iggy and Dunkin, before heading out to help crew at Bird Haven with Lani. Once the 55-mile horses left camp, some of the electricity in the air diminished.

Iggy, always the horse to be watched carefully, he of the internalizing nature, the temperamental tummy … I observed him as we walked.

Still a bit on his toes, we did laps, passing through tempting grass, Iggy still in ants-in-pants mode, a little pushy and in my space. Dunkin looking at him with great disdain, or so it seemed, willing as he was to graze given the opportunity. This was Iggy’s ride, a test of sorts. Dunkin, bless him, was playing chaperone.

At some point, having paid adequately into the move-his-feet jar of anxiety reduction, Iggy grabbed a little grass. Then more. Until he was eating like, well, he was eating like a horse. My biggest challenge then was managing lead lines as they circled around me, changing direction, searching for the best patches of yumminess.

Iggy’s eye had changed. He was back in his own body.

I suspect I followed his lead. Exhaling, relieved. Back in my own.

A few years ago, I discovered the joy of audiobooks and podcasts. I was always a pretty voracious reader, but got caught up in how “busy” life felt and sitting quietly with a book screamed Overly Indulgent.

But as someone who drives and travels for work, listening to audiobooks or podcasts is doing two things at once, thus acceptably productive, and entertaining to boot.

My listening choices seem to correspond magically to my life – I can’t explain that, but I’ve come to accept and even expect it.

The Infinite Game is not my first Simon Sinek book. I’ve read Start With Why and Leaders Eat Last; I’ve watched several of his Ted Talks and listened to his podcasts.

In short, the book encourages business leaders to think of business itself as an infinite game. Finite games, by contrast, are defined as those with known players, a winner and a loser, and most critically, an end point. Football, for example, is a finite game. (Go Bills!)

Approaching business as a finite game focuses on competition, profits, and short-term goals. In other words, winning.

Approaching business as an infinite game focuses on keeping the game going, and whatever it takes to do that; remaining nimble and inspiring creativity and cultivating team members who can adapt to change. 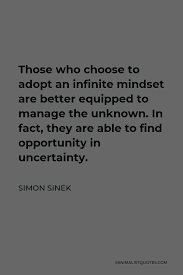 It gave words to the approach I’ve been stumbling around with, having no name for it, with my businesses. I fixed the problems my clients had, which meant evolving what I did to accommodate their needs.

But it also spoke to my approach to endurance riding.

I always thought that my philosophies with my horses and the sport of endurance (and dressage for that matter) was a product of the fact that I am not particularly competitive by nature.

Decade Team and 100s and the obsession of HOW my horses were doing rather than how well they were competing.

Not how fast they were going, but rather how far, for how long and how good they felt doing it.

Iggy is a perfect case study. He’d been available to buy because he had what could only be described as a questionable work ethic. He was quirky and a little complex, but in some ways so simple and sensible. The challenges were a nice fit for my slightly obsessive horses-as-jigsaw-puzzles-to-be-figured-out nature.

During my divorce, he went to a couple of homes where he wasn’t quite a match, and he returned to me just six months ago. My expectations were profoundly low; he would be a companion horse to Dunkin.

As I was lying in my bed at OD that first night, wide awake and reminding myself that suffering while I was dry and comfortable didn’t make my being-poured-on horses one bit drier, I questioned being there.

There are countless reasons the sport of endurance is a finite game for so many.

But then there are the others, those with an infinite mindset, and for them the word endurance takes on a whole new meaning.

As Lani and I hit Bird Haven to crew for Kathy that Thursday morning, it was like a dysfunctional family reunion.

We set up our chairs, caught up with other people crewing, hugged folks who had traveled from near and far to work at the ride. Vets and timers and pulse takers, almost every one of them a former (or current) endurance rider, made available that day by circumstances, but keeping their endurance game going. 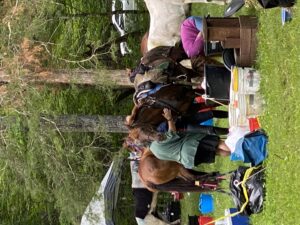 An organized disaster of buckets, stuff, horses and their people. Bird Haven.

I joked to more than one that, given the forecast, we were really all sort of OBLIGATED to ride the 100 mile ride, having been granted by the OD Gods a profoundly horse-friendly forecast.

But most of us weren’t. For this reason or that reason, we were doing a shorter distance. Or we were crewing that day instead. Or volunteering. Or vetting. Or supporting the amazing horses bred on our farm and the riders who were piloting them. 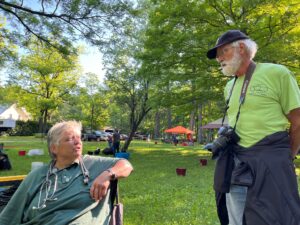 Lani Newcomb and Tom Sayvetz discuss life and horses and the weather and other natural phenomena.

For us, endurance is an infinite game.

For me, the game has changed.

I’ve said for years that no one really cares much about your AERC ride record, except perhaps you, or some person who looks it up to prove their point in a Facebook fight. No one cares all that much if you rider-optioned this ride or that, or if you had 5K miles or 3K and whether they were Limited Distance (LD) rides or 100s.

I’ve done plenty of miles in rain, in crazy heat and humidity, and even in snow.

And as I sit here typing I have zero idea how many miles I have, how many 100s I’ve ridden.

A month or so ago, I was signed up for the Biltmore ride as a warm-up ride for OD, having walked my new farrier through applying EasyCare N/G shoes for a shoeing cycle as a test run. 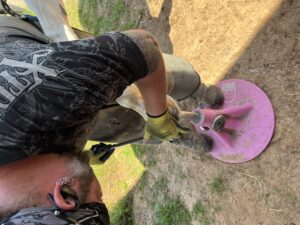 What’s not to love about a farrier with a pink hoof stand and lots of piercings and tattoos?

When the forecast for Biltmore meant what could only be described as a muddy course, I opted not to go. Composite shoes on slick mud? A recipe for disaster. 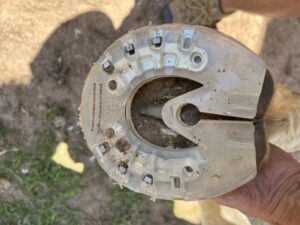 I love the shoes but on slick mud they are no bueno.

There was a part of me feeling guilty for that choice, having further proof of my lack of killer instinct. Yes, indeed, I am a wuss. There, I said it.

I expressed this to my best friend, Anita, who has crewed for me on 100s in the past and always viewed my endurance obsession as decidedly impractical.

Leave it to Anita to help me recalibrate.

So here I was, at Old Dominion, having opted for the LD ride, sharing Dunkin with my friend, Dawn, whose horses were having, as horses do, some iffy soundness things.

Lending a horse to help her further her infinite game and having an eating-machine buddy for Iggy?

Lani and I had a long talk, as we do, her sharing photos of her herd of former endurance and fox hunting horses in their new gigs – teaching children to ride. Fluffy and Teabiscuit, bedazzled with glitter, patiently catching unbalanced riders over a fence, providing the life lessons of persistence and empathy for kids who need to catch a break. Reading intention, as horses so brilliantly do, happy for the gig. 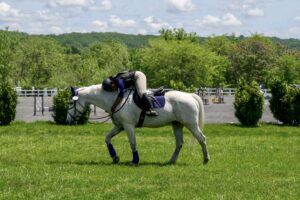 Doing it all for a hug. Photos courtesy of Lani. 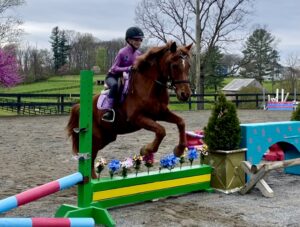 An infinite game career for retired sport horses. (Did she mean to match her saddle pad to the blooming redbud? I think yes!)

Lani and I spoke at length about how right it felt.

I’m contemplating my own role moving forward in the infinite game of endurance.

A few months ago I drove north to Kentucky to present an Endurance 101 clinic for the Daniel Boone Distance Riders. The amazing volunteer team had handled everything, I was just a hired gun with a laptop, a PowerPoint and some Ziploc bags full of electrolytes to taste. 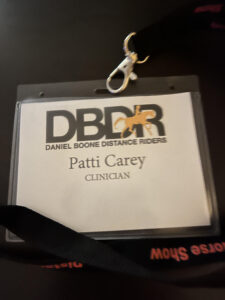 I’ve had a lot of roles in the sport. Rider, ride manager, ride secretary for others’ rides, volunteer, BoD and committee member and chair.

But this, the role of welcoming new riders to the sport, with a bit of humor and a little old-school horse sense, and the stories of all the ways I got it wrong – a cautionary tale – this gig, every time I do it, it feels so right.

When it comes to the horses, I have two constantly reconfiguring jigsaw puzzles I’m solving. Some of my most gratifying time is spent just watching them, observing, celebrating a new way of connecting with them. 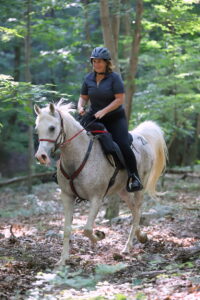 Iggy, for the record, clearly appeared to have fun at the ride, bright-eyed and forward and eating at every opportunity. He tackled the trails with charming Iggy aplomb, with Dunkin, if one speaks horse, grumbling at our slow pace that day, but fulfilling the co-pilot role with ease. We will have our day, no doubt, very soon. 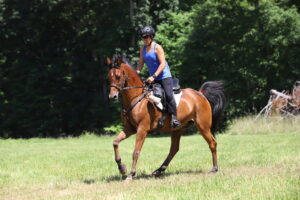 Dawn and Dunkin. Time to race yet? (Another great image by the talented Becky Pearman.)

Dawn and I laughed and swapped tales and shared trail with an old friend and a new one, but it was All About Iggy. It was as though the universe aligned that weekend to help with the mission. 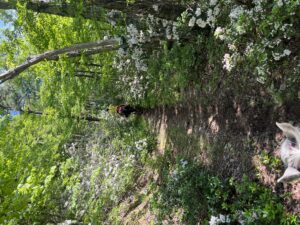 On trail image of Dodie and her braid and Bee. Oh, the mountain laurels! 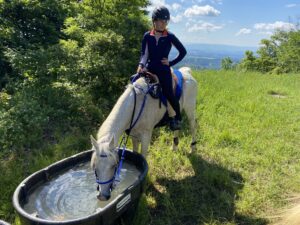 Amelia and Zak, who was still just long enough for a big drink. Photo by Dawn.

I have a new litmus test for my upcoming rides. For what I do next.

Does it sound fun? Does it help me stay in the game in a way that feels right in my soul?

If the answers are yes, let’s hit the road.

In this case, To Not Finish Is To Win.

Here’s to the tribe members finding a way to make the sport infinite? Who we rely upon to keep it going for the rest of us?