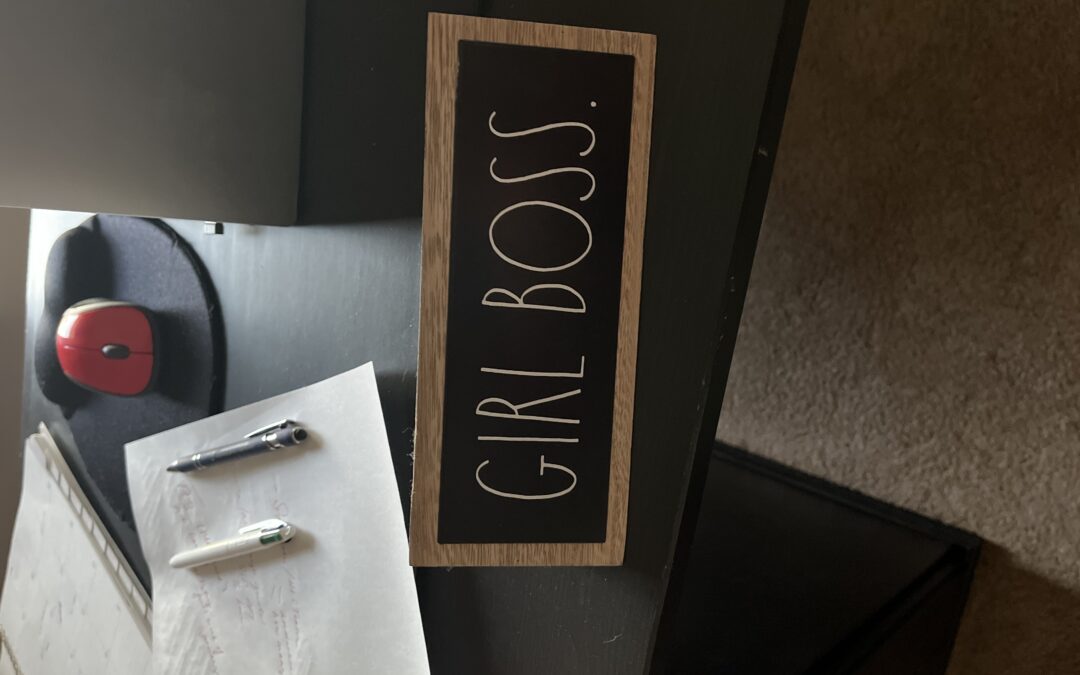 Once again, sitting with my laptop and my second cup of coffee, watching the sun rise while Tom indulges in the outrageous act of sleeping in until roughly 7am, I am introspective about the fact that most of life lessons are repetitive ones.

Life is imperfect but very good indeed. If you are not looking around routinely to count your blessings or telling the people that you love dearly (quirky and human as they are) that you love them dearly, you are missing out on a big chunk of life.

It is all about chipping away at it. One day at a time. Picking up what needs to be picked up, then setting it down and letting it go when it’s time to move on, picking it up once again when the timing is right. The magic seems to come in the “letting go” moments for me.

You really do know what you know. You actually are okay and competent, and in a lot of cases, everyone knows it but you. If you’ve had a rough patch, or have come out of something traumatizing, or been told you don’t know what you really do know, you might need an outsider to remind you. There is something exquisitely familiar and reassuring about someone saying “No, you are right. Go get it, bad ass beyatch.”

Horses and a tribe of horsewomen have a way of keeping me on this path.

[A little aside here:

It’s been well over two years since I’ve ridden regularly, or had an educated eye on the ground, and it’s showing, particularly with regard to my confidence about my rustiness. This is the longest gap I’ve had in riding regularly since I was, um, seven years old.

I couldn’t afford the risk of riding, self-employed as I am, with two businesses to run, animals to care for solo in an isolated area, and the need to financially support myself. And someone else who was not supporting himself.

Riding was an indulgence in frivolity that needed to wait, to be set aside, for a moment when it was safe to play again.

There is something particularly satisfying about withholding instant gratification and then, in a burst of what I can only describe as the utter gratification borne of taking on adult responsibility and reaching ‘the other side’ that makes the rewards that much more, well, rewarding.

In some circles, this is known as “adulting.”

I’m sure this is something felt by most people after a boot-pulling-up period that reaped something fantastic or even just peaceful after a period of hell — my closest tribe members are always in various stages of it: grieving a death or exhausted by school or bravely facing cancer treatment or crippling financial struggles or taking on a health issue/injury or aging parents or divorce or parenting struggles or you name it. We all have a story, a battle, a climb.

Those I most admire face those things head-on, taking responsibility for what needs to be done, fiercely and imperfectly, falling down and picking themselves back up, and laughing and every chance they have.

Those who lose my respect blame others, indulge in self-pity and rely on others to carry them.

Okay, that was a tangent.]

I have been meaning to get a dressage lesson on Dunkin’ since the day he moved to South Carolina.

I’ve watched Hannah Jungling teach a bit, and knew right away she was ‘my peeps.’ Practical and positive and enthusiastic and clear. These are the teachers with whom I tend to vibe — like Dorothy and Paula and Walter and Joanne and a bunch of others over the years, all of whom gave me tools for my tool box or whose voices ring in my ears in moments of self-correction or celebration.

Dressage will always be addicting for me. That feeling of a horse in self-carriage, boinging athletically along, longitudinally and laterally straight and biomechanically perfect in their carriage at whatever level of development — so good, it’s like coffee, or red wine or being hugged tight by a big, really good-smelling man. You get the idea …

Hannah and I kept trying, but we’d miss. She or I would have to cancel at the last minute, some horse or family crisis would come up (Hannah) or some damned business thing for me. Life getting in the way of the best laid plans.

When I rode with Kathy Viele on her Grand Prix dressage horse, Wicket, who recently kicked butt and took names in Kentucky at the National Championships, well I got re-inspired.

We did a little hack at Hitchcock Woods for Wicket’s ‘Play Day” and it was brisk and cool, and so Kathy used his excess energy to warm up in piaffe while I finished tacking up, then Kathy took a little starch out of Wicket by schooling passage up a long hill, and at some point threw in a series of perfect one tempis as we cantered along the trail.

Now, one would think that I would have used my phone to capture images of these moments, but no, dear reader, I was just gaping my jaw and enjoying the view and will store them in my gray matter, but I did get this dramatic shot of them walking ahead of me and Dunk:, yes, blurry. 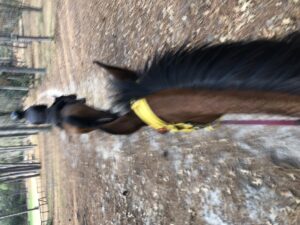 But I was inspired.

It’s safe to say my lesson with Hannah was a teeny bit more elementary than the lessons Kathy and Wicket get a couple of times each week, working on the Grand Prix Special and a Freestyle, such as they are.

But Dunkin and I are improving our dancing.

Hannah was as I expected. High energy, and observant and positive, and the best kind of teacher. No pointing a finger at my equitational faux pas — I have several — but saying, ‘I do that too, let’s work on it.’

Yep, wonky right hand that does all sorts of fascinating and dysfunctional things — breaking at the wrist, crossing over the neck, getting stuck around my navel.

Yep, tendency to go fetal when anything goes wrong.

Yep, heels not really down. Oh hell no, not really even level. And oh, yes, nagging. Oh, the nagging. (When Derith got a shot of us cantering a few weeks ago, I cringed. Despite Dunkin’s ridiculous cuteness.) 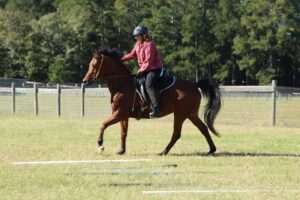 Yep, dropping and coming forward with the right shoulder. Sided. Like all creatures. Yes, ma’am, still there.

But on the positive side, Dunkin is a treat. He likes to dance and he can move. He also has the benefit of being adorable and chipper, and having an admirable work ethic. And it is also possible that I am not a horrible rider, as one has a tendency to tell themselves in their most self-flagellating moment.

The take-aways from my lesson with Hannah were so basic as to be profound and so strikingly universal, I suspect, that they are worth sharing.

And on the conditioning front … boundaries also key.

Dunk now self-loads in the trailer without hesitation. Check.

We’ve gone out with a variety of company on a variety of terrain. In the front, in the back, in the middle. Check. 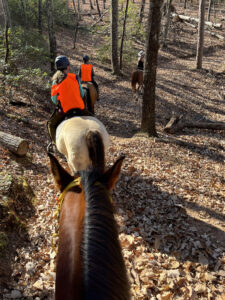 We are casually increasing the distance, the average speed, the degree of difficulty. A bit at a time. Not all at once. Plenty of rest between.

Dunkin is not permitted to tailgate, even after falling in love with Mattie (one of Kathy’s other horses) after a two hour haul together, and thinking a hand gallop with a side of frolic would be the best way to keep up with her much bigger canter. No. Wait. Give her space. I’m driving the bus. Even if Dunkin swaps leads and does a canter dance in protest.

If Dunk is doing his Very Big Boy Trot to keep up with his 16+ hand girlfriend and feeling all that and a bag of chips and lowers his head to do the big Arabian head shake, it is okay to tell him to knock it off, even if I’m laughing, because I don’t want to see what is next in his bag of feeling-good tricks.

If he’s up in front, it is a-okay to look for the mountain lions and keep an eye out for squirrels with big sharp teeth, but you will keep going forward. And it is a-okay for me to grab a bit of mane so it is easier for me to sit up and ride through the suck-backs without compromise.

It’s a Girl Boss set of lessons, training while we’re conditioning. Getting to know one another, what is normal for Dunk relative to eating, drinking, traveling, going down the trail, so I will immediately notice when something is awry. What I’ve preached about in clinics or when mentoring, for years.

It’s what I know. What I really do know.

Dunkin is a smart little whip, he’s plucky and happy and loves his job. He eats, he drinks, he’s pretty easy to pace, and keeping up with Mattie’s walk is wonderful for helping him find his ‘big walk.’

And big things happening on the home front. Someone is building a wee horse farm. Chipping away at it. One day at a time.

More on that soon …