Last week I met Dawn for breakfast while traveling for work.

We caught up, talked horses, talked life, as we do.

As we were wrapping up, I expressed that I was feeling ashamed that I’d let some things slide with Dunkin.

“Okay, okay, I now recognize and own where I slipped up.”

“What’s that saying? The universe sends you what you need, not what you want.”

Me, scrambling, “I need to write that down.” And I did. 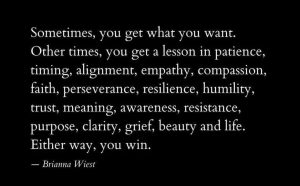 I’ve had Dunkin for just over a year now. He is the first ‘made’ horse I’ve ever owned; purchasing him was an indulgence, an acknowledgment that I was on the ‘beyond’ side of 50 years of age, was no longer going to be buying a greenie to finish and dealing with who-knows-what-nonsense. It was a big grown-up moment for me.

I also think it put me in a slightly complacent frame of mind.

Every time you ride, you are either training, or un-training your horse. (Gordon Wright)

It turns out every time you handle your horse, you’re doing the same. Of course. I know this. I’ve told OTHER people this!

Another “Do As I Say, Not As I Do” moment. Not the first.

Dunkin has had some quirks, mostly on the ground. I taught him to self-load in the trailer, and it was clear he is smart as a whip and very responsive. This is not a dull horse by any stretch.

Under saddle, he was consistently lovely.

On the ground, he’d occasionally over-react to having his face brushed or touched.

It would take a few minutes to catch him in the pasture.

I tied him to the trailer and he set back, breaking a leather halter.

Quirky stuff. I worked around it. Puzzled over it a bit. Does this horse just not like me?

He would get wound up on the ground in a group situation. I’d make allowances, get on safely, sigh, say to myself I needed to work on that. Then didn’t.

He had body work; massage and chiropractic. His saddle was flocked and fitted. He had dentistry.

He was trained and experienced and safe to ride, if a bit spooky sometimes. Long periods of time passed between quirky over-reactions. He was fit, we did fun things, he completed three endurance rides in lovely form, chaperoning Iggy at two. It was a fabulous summer.

Even as I type this, I’m embarrassed. I am, I thought, a better horseperson than this. A better horse trainer.

Every horse has something to teach us.

Finally, Dunkin acted out in a way that was undeniably a red flag. I wasn’t badly hurt, but I could have been.

Was it something physical? I am solidly in the camp of eliminating physical causes to behavioral problems. He got a freakishly clean bill of health from the vet, nothing neurological, remarkably sound.

It was the best of news, and pointed to something crystal-clear. Dunkin’s problem was lying right between his ears. And at the end of the lead rope attached to him.

Dunk and I spent some time with a local ‘cowboy’ type of horse trainer, another investment to confirm what I already knew, deep down.

The only person who could resolve what was going on was me. I am convinced the most significant issue was a failure to connect.

I have time. So that’s the focus now.

I have a folding camp chair out by the barn. I take a book and I grab the chair and I sit out in the pasture with the horses. I just hang out with them. It’s uncanny, really. Iggy boings right up like a yellow lab, seeking attention. Hey, hello, pick me, pick me. Dunk hangs back, sometimes walks away. Eventually, he chases Iggy away from me, but that doesn’t mean he approaches me right away. It takes a little time.

I ask for nothing. I say hello when he approaches. I continue reading. I might reach out to scratch him. He often walks away.

On most days I have a rope halter and lead on my lap. Some days I put it on him, and then let him go again.

When I ride or work him, I go to the gate with a cookie and his halter. There is no more going up to him, or walking after him to catch him. It’s a fine dance of waiting, retreating, watching his feet and my own, seeing how he reacts to what I do, backing off, approaching, and he only gets a cookie after the halter is on.

No one has ever accused me of being patient.

Which is precisely why Dunk came along and I got this lesson.

When the student is ready, the teacher will appear. (Tao Te Ching)

Some days I ride Dunk. Other days he just gets groomed and smooched and turned back out. Other days it is ground work in a rope halter, giving to pressure, moving his feet, me paying attention to him, him to me. Fine tuning. He is tuned in and smart, but quick to either disengage or take over when things aren’t quite to his liking. He has opinions. So do I. (I think he has decided that he will drive the bus if he decides I’m not qualified to do so.)

He’s exquisitely good at being a horse, in all his horsiness.

I am so grateful for this horse and what he’s teaching me.