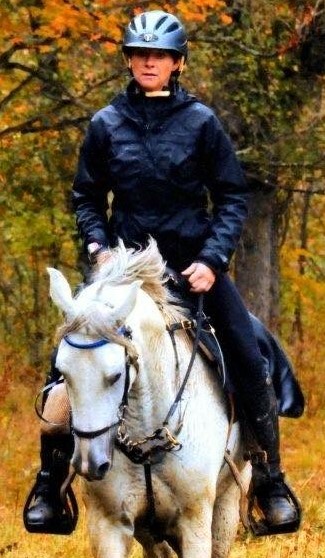 I don’t think I remember exactly when or where I met Sam. Sixteen or seventeen years ago? Is it possible it was that long ago? It was at an endurance ride, of that I’m sure.

She reminded me of my mom, my birth mom, long gone, but whenever I meet a woman who does, I feel a little pull that I can’t quite describe at the innermost core of me.

Oh, she was sassy to be sure, I remember that, and since I was a Ride Manager and she foolishly opted to become one, we quickly bonded over the joys of our lack of control over the weather and the riders who inspired migraines. I was probably the worst sort of mentor for teaching patience, having none myself, but Sam was sharp as a tack, super-organized, and also unlikely to tolerate a fool, so she took to the gig like a duck to water.

Beautiful, quick to flash a broad smile and a witty comeback, I was drawn to her like I am all of the strong women in my life, and we became fast friends.

Sharp, sharp, sharp. There is that quote from WH Auden which rings true for me.

Sam has always been able to make me laugh.

She is very much a “Girl, you will just not believe this shit … ” friend. So we spent a lot of time over the years, meeting up at rides, me attending hers, her attending mine, exchanging knowing looks and advice, stolen laughter and commiseration.

Because we knew as Ride Managers that if you didn’t laugh, you were going to cry, and nobody has time for that.

I recall seeing her for the first time at the endurance convention not too long after she lost her husband David in a mining tragedy in 2006. Her grief was palpable, and her strength became more sinewy, of the clenched-jaw variety; I remember marveling at her toughness, the vulnerability of her thinly veiled pain.

There was no question, really, that she would carry on and soldier through, she had no choice.

Our paths diverged, such as they do. She moved to Texas, her girls grew up, and like so many, we kept up on Facebook. A “like” here, a comment there, a joke about managing rides and who had the crappier weather for theirs (an ongoing contest and I’m pretty sure I won). I was tickled to see her with photos of her grandbabies. So young! (I’m sure there’s a West Virginia joke there somewhere. One she’d be likely to tell at a campfire, cocktail in hand.)

So when she reached out, I suspected there was some news to share or some question to ask. And whatever it was, it was not the sort to be broadcast on a Facebook feed.

On that very day, I’d just edited a blog I’d drafted after more than two years away from writing. I was and I am rusty and out of practice, sitting down at the keyboard and processing my overthinking mind into run-on sentences that eventually converge into something coherent (theoretically), I was hesitant to hit ‘publish.’ Some things perhaps are not written to be shared, or at least perhaps not right away. Something made me hesitate.

It is as though, over the last two years, I have begun to listen above the noise and occasionally hear someone whisper to me “Just stop and breathe, and wait a moment.”

Remarkably, in those quiet moments of what I can only call Grace, or shortly thereafter, something happens that was meant to happen. That I might have missed in a flurry of action taken or noise made.

As we caught up, bite-sized and abbreviated catch-up news, I waited. (Not so patiently. See above.)

“I have breast cancer and I want you to help me write about it.”

Dr. Jim Baldwin, may he rest in peace, always said the hardest part of riding 100 was signing up.

So where do you begin?

We have no idea what we’re doing here, Sam and me. A little like when we started endurance riding. But we’ll figure it out.